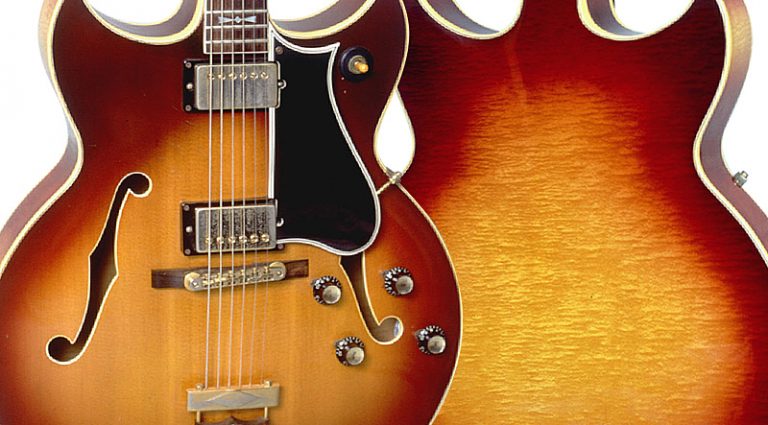 This is a guitar which for all practical purposes appears to be a Gibson Barney Kessel Custom model, but the label clearly indicates it was made as an experimental prototype.

The date of this instrument precedes the introduction of the Barney Kessel. Our shop obtained it from the original owner, Jon Hines, who purchased it at Hewgley’s Music, Nashville, in 1960.

Hines obtained the instrument from J.G. Stone, owner of Hewgley’s. At that time, Stone told Hines the guitar was one of a pair, and the other was apparently exactly alike except it was single-cutaway and went to Tal Farlow. When Hines obtained the guitar, the tailpiece plaque was blank, so Stone sent it back to have Gibson engrave Hines’ name on it.

Throughout much of the ’60s, Hewgley’s Music was the exclusive Gibson dealer in Nashville. The store went out of business in September ’98, after more than 40 years in business. While recent years saw Hewgley’s do relatively limited volume with Martin, Gibson, and Fender, in the ’50s and ’60s the store supplied instruments to many of Nashville’s leading professional players and was an important dealer in the territory.

Walter Carter checked Gibson’s records on this guitar and found it listed as being made for Tal Farlow in October, 1960. He found no record of the other guitar. Since Farlow is now deceased, we are unable to ask his personal recollections, but it’s clear this guitar pre-dates the introduction of instruments made with the Barney Kessel endorsement. It would appear Kessel was shown an instrument of this type and decided to endorse it rather than designing a Barney Kessel model on his own.

While many artist-endorsed models are represented as having been designed by the endorser, in many cases the artist simply selected a prototype design the company had on hand. Based on the evidence of this guitar, it would appear Kessel had little if any input in the actual design of the model he endorsed.

This guitar differs from the standard production-model Barney Kessel Custom. It has a maple neck with an ebony center stripe rather than the typical one-piece mahogany neck normally associated with the Kessel model. The maple neck construction on this example is the same used on the Super 400, L-5, Byrdland, and J-200 models. The guitar features the same ornamentation and structure as the Barney Kessel Custom; a laminated spruce top, laminated maple back and sides, Brazilian rosewood fingerboard with bowtie-shaped inlays of the same style used on the RB-250 Mastertone banjo, musical note peghead inlay, and gold-plated metal hardware.

Shortly after the Kessel models went into production, the laminated spruce top was discontinued and replaced by laminated maple that matched the back and sides. This guitar has one PAF humbucking pickup and one early patent number pickup. The wiring and all solder joints appear original. Gibson did not start using humbucking pickups with patent numbers until mid 1962.

When I asked Hines if he had ever had any work done on the instrument, in view of the fact he claimed to have purchased the guitar in 1960 but the presence of one patent numbered pickup seemed to contradict this, he responded that soon after purchasing it he recalls having sent it back to the factory for an electrical malfunction. In typical Gibson fashion, it appears that rather than rewinding a pickup or doing repairs to components, they simply replaced parts with what they had on-hand at the time. Since the work was done shortly after the guitar was made, all the parts appear visually correct and all wiring and solder joints appear to be fully factory-original.

The guitar and its original brown hardshell case with pink plush are in exceptionally fine condition. This is a very fine-sounding instrument that plays extremely well and has great historical appeal. Not only is it probably the original prototype of the Barney Kessel model, it very likely was a proposed prototype Tal Farlow. While Gibson received a great deal of input from players and artist endorsers, it is clear the company’s own design team was responsible for the vast majority of its innovations and new models.

This article originally appeared in VG November 1998 issue. All copyrights are by the author and Vintage Guitar magazine. Unauthorized replication or use is strictly prohibited.