Ken Fischer’s prolonged illness and subsequent death at the age of 61 remains one of the great tragedies of the guitar-amp world. Aside from the fact he was a good soul taken too soon, if this rare and genuine tube-amp guru had enjoyed better health and greater longevity, he would most likely have blessed the world with at least a few more of his glorious Trainwrecks.

An RCA-trained electrical engineer, former Navy aviation/anti-submarine technician, and Ampeg engineer, Fischer was running his own amp mod and repair business in New Jersey when he built the first Trainwreck at a customer’s request in late 1982 and early ’83. Through the ’80s and into the early ’90s, he built, in his own estimation, slightly fewer than 100 Trainwrecks, before chronic fatigue immune dysfunction syndrome and related complications slowed and ultimately halted his efforts. Fischer died at his home in Colonia, New Jersey, on December 23, 2006.

We featured a Trainwreck Express dubbed “Nancy” in May of 2010, and it would be easy to conclude this amp is much the same. But the truth is, every Trainwreck was an individual, as his naming regimen (as opposed to the more-traditional method of giving a serial number to a amp) declared. This one is particularly special, even aside from its undeniable sonic merits. Owned by Charles Daughtry, this Express – named Kaylene – is widely believed to be the last complete Trainwreck amp Fischer built, and it has an amazing story.

“I had always been an amp guy,” Daughtry said. “I collected vintage Marshalls, and had Dumbles for a while. I found my first Trainwreck in San Antonio in the ’90s, and as soon as I got it, I sold all my Dumbles.”

Five Trainwrecks into his obsession, Daughtry (also a noted vintage Les Paul ’burst aficionado) had already enjoyed several long telephone conversations with the creator of these amps when he decided to take a shot at getting Fischer back to his workbench. “I’d been talking to him on and off, trying to get him to build me an amp, and he’d say he couldn’t, or he was too tired, or he only had one chassis left. In the final conversation before he agreed to build it he said, ‘I found that one chassis that I had left, and the faceplate has an engraving of an Indian chief with a headdress.’ I said, ‘That’s funny, I’ve got a picture of my son wearing a headdress when he was young.’ Kenny just said, ‘Send me the picture,’ and that was that.” 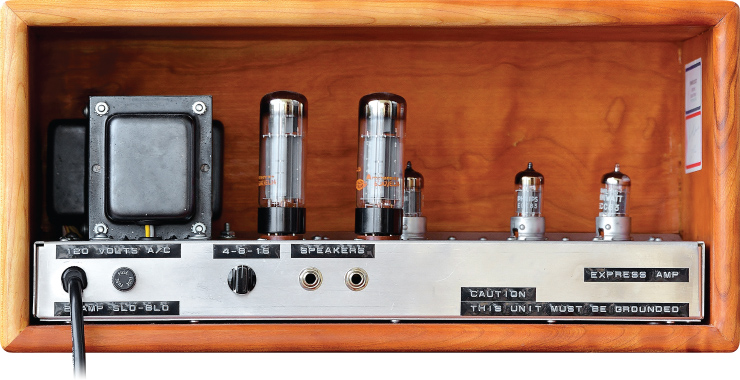 “I have no doubt he was not going to build me an amp but for the coincidence of my son having the headdress on.”

The Express is Fischer’s rendition of a Marshall-style amplifier, but only in the broadest sense, given the tremendous amount of originality in his circuits. It carries two EL34s in fixed-bias Class AB, with three ECC83s in the preamp, along with controls for Volume, Treble, Middle, Bass and Presence on the front panel – all looking very plexi-like. But, very little of what goes on inside is done quite like Marshall; rather than the archetypal cathode-follower T-M-B tone stack of the Marshalls (and Fender’s 5F6-A tweed Bassman), Fischer’s EQ stage follows the first preamp stage, with the Volume control placed after. Two further ECC83 gain stages, along with some interesting tweaks in each, ramp it up before it hits a long-tailed-pair phase inverter and what is a fairly conventional output stage. There are plenty of tricks throughout the rest of the amp, too, including a very robust six-diode bridge rectifier and heavy power filtering.

And, while plenty of erstwhile amp aficionados have checked out pirated Express schematics online or poked a nose inside a Trainwreck chassis and sniffed, “Eh, nothing special,” the magic is very much in the way Fischer put it together. Component selection, transformer design and production, layout and wire runs, solder type and technique, and tube selection were all considered integral to the function of these amps, which were far from cookie-cutter designs. Shake up the bare bones of the schematic and assemble seemingly “qualified” components without consideration to the fine points – or, in short, without being Ken Fischer – and the results can very often be underwhelming. In this way, no two Express amps were built precisely the same, and every one was very precisely tuned with consideration of the whole.

How does this one sound? Daughtry is happy to elaborate.

“Kenny always told me they got better over time and had to break in,” he said. “I was always a little skeptical about that, but this one really did get better. When I first got it, it was great, but it sounded a little strident. But I played it over the years and now I think it’s my best-sounding Trainwreck. It’s got great mids, really sweet highs – just an amazing amp.

“[Trainwrecks] are the most touch-sensitive amps you’ll ever play, by far. If you have a bad right hand, you do not want to play a Trainwreck! The sound’s so immediate from the pick to coming out of the amp, [which] opens a whole new kind of playing. You’ve got to get used to it, I suppose. The best thing, in my opinion, about Trainwrecks, is the harmonics. With a fair amount of gain on them, you can hit a chord and literally hear every string and the harmonics developing off of the chord as you get further and further from [the attack].”

Fischer himself always considered his creations more instruments than mere “amplifiers,” and built them very much with the realization some guitarists just might not control them very well.

“There’s another analogy,” Fischer told us in 2004. “What makes an F-16 jet fighter able to turn so fast and do all these wacky maneuvers and stuff? If they didn’t have a computer onboard, the pilot wouldn’t be able to fly the plane. It’s the instability that lets the plane, in a fraction of a second, roll 180 degrees and make a 90-degree turn at the same time.”

The Trainwreck, then, is the hair-trigger fighter jet of guitar amplifiers. “When you start getting complex harmonics, that’s what you need to make an amp sound complex. The more stable an amp becomes, the less complex it is.”

Ditson’s Style 11 and the Birth of the Dreadnought