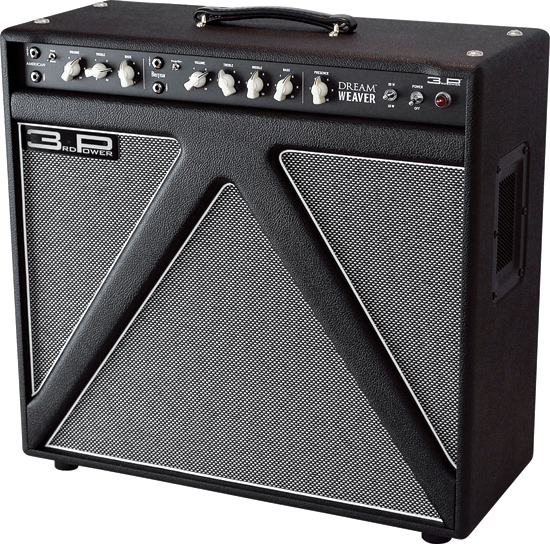 Purchasing a new amp is much more than buying a piece of gear – think of it as hiring out a job. In most cases, you hope this new employee will help you sound great, cover the required tonal bases, prove reliable, and have the right amount of volume on tap. In this context, Jamie Scott’s 3rd Power amps are talented and versatile job candidates that deserve very serious consideration.

The latest in 3rd Power’s Dream Series is the Dream Weaver, whose two channels – labeled American and British – give working players iconic Fender Bassman and 1968 Marshall Super Bass sounds in one package. (While the Dream Weaver is available as both a head and a combo, the 38-watt 1×12 combo is reviewed here.)

In addition to Volume, Treble, and Bass knobs, the Dream Weaver’s American channel has a Tweed/Blonde switch for toggling between ’59 Tweed and ’63 Blonde tones. Over on the British side, Treble, Middle, and Bass controls are complemented by an Orange Glow switch that hotwires the 1968 plexi tone. Both channels are affected by the front-mounted Presence and the innovative rear-mounted HybridMASTER control that can help conjure the right tone, no matter the dB requirements. Each channel has an input plus a secondary labeled “Jump” for bridging the channels. Besides the master volume, the back panel has individual speaker outputs for 16, 8, and 4 ohms, as well as an effects loop. The tube layout includes four 12AX7s and twin EL34s, but it can be rebiased to utilize 6L6 output tubes. The combo comes equipped with an Eminence Legend V128 speaker.

The Dream Weaver was tested with a ’69 ES-335, a ’67 Telecaster, and a recent ’59 reissue Les Paul. Starting on the American channel’s Tweed setting, the full-midrange and earthy, immediate tones definitely say “late-’50s Fullerton amp.” The HybridMASTER control was used to deftly dial in varying levels of drive that should please all tweed fans. In the Blonde position, the tone became punchier, with a bit less midrange but more bass. Furthermore, the feel of the channel changed, becoming a little more refined and firmer to the touch than in the Tweed position. The drive sounds became bigger and tighter, yet did not have some of the focus evident on the Tweed setting. Altogether, both are wonderful settings that give the American channel a great level of tonal variety on its own. It’s worth noting how the Blonde clean setting induced broad grins when a local jazzer amazed with chordal stabs and single-note lines on his Benedetto-equipped Epiphone archtop. Plugged in to the 3rd Power, this local sounded like Color Him Funky-era Howard Roberts – robust, clear, and present.

Across the pond, so to speak, on the British channel, there’s more aggressive flair and greater EQ tweakability. 3rd Power’s take on classic late-’60s Marshall-styled tones have nice bark and an ability to clean up with subtle changes in volume or pick attack. The Orange Glow setting gave more drive and shifted the channel into hot-rodded Marshall tones sure to satisfy anyone’s classic rock longings.

After getting a good feel for each channel, it was time to jumper the two sides and see what interesting mélange of flavors could be summoned. Plugging into the Brit side and mixing in a bit of the Blonde Bassman produced a quite tasty mix of driven and clean – dirt, with a bit more clarity in the highs and lows for a two-amp effect, but without the need to carry two amps to the gig. An echo unit between the two sides elicited a significantly gnarled tone from the Brit channel with cleaner repeats off the American side. This kept the dirt tone tight, and also prevented the echo repeats from mudding up the tone.

The Dream Weaver is the crowning achievement thus far in 3rd Power’s crown. Its ability to cover the aforementioned Fender tones alone is enough to excite the tonal illuminati; and its stellar take on the crunch of a plexi, makes it a hard-to-beat tonal package.