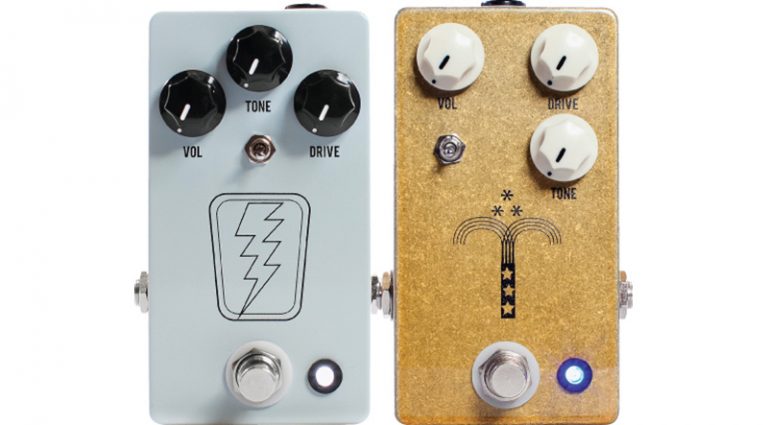 Started with a quick repair to a Boss pedal in Josh Scott’s Mississippi apartment, JHS has evolved into a well-regarded and growing boutique pedal company thanks to offerings like their SuperBolt and Morning Glory.

The SuperBolt is one of those pedals that tube hounds crave, one that reacts with a good amp rather than smothering it with gain. The goal of this box is to re-create the sound of ’60s Supro (and Valco) amps, which appeared in countless Led Zeppelin tracks and on early Stray Cats cuts, as well as other legendary recordings. The original was a 1×12 tube combo with a unique overdrive sound, dirty, but warm with lots of personality. Its tone was certainly not a one-trick-pony overdrive (Jimmy Page’s epic guitar solo in “Stairway to Heaven” was cut through a Supro), and that’s precisely what JHS is after with the SuperBolt: variety with classic soul and dimension.

The pedal is classic and simple: there are just three knobs (Tone, Vol, and Drive), and a Hi/Low toggle switch, as well as an AC adapter jack and guitar in/out. Internally, the circuit converts the 9-volt juice to 18 volts for more punch and headroom. As befitting such a simple pedal, just plug in a guitar and a decent amp, preferably tube, to find flavors aplenty. Dial in fatter, thicker tones that Page would have used on “Communication Breakdown,” “Whole Lotta Love,” or “Heartbreaker” – beefy tube tones that provide ample sustain without overblown distortion. Think of the SuperBolt as a musical overdrive solution, providing plenty of dynamics, even though the sound is still smokin’ in that great ’70s way (think Zep, Aerosmith, ZZ Top, or Rick Derringer).

Conversely, dial back the heavy artillery and go for cleaner sounds, as Page frequently did in the mid-Zeppelin era; think “The Song Remains the Same,” “The Ocean,” or Songs from Physical Graffiti like “The Rover” or “Custard Pie.” Here, Page developed tones that rocked but provided clear note definition, and the SuperBolt emulates that nicely. Play around, too, with the Hi/Low toggle. Hi provides more headroom and upper mids, while Low goes to a darker, mellow tone; roll back the Drive for some interesting jazzy textures. No matter where one goes on the SuperBolt, it seems, there are cool sounds, from sultry to blistering, to be discovered.

The Morning Glory takes a similar track, but it dials back the gain even more. This pedal is for the cat who really wants transparency – i.e., guitar and amp shining through, with a pedal to accentuate every note. Think about what the right bit of salt and pepper can do to food, bringing out interesting flavors without burying them. Scott’s idea behind the Morning Glory was to tweak the original English-made “black box” Marshall Blues Breaker overdrive that he’d been using for a decade.

Like the SuperBolt, the Morning Glory just has three knobs (Vol, Drive, and Tone), plus a Bright Cut switch to match the EQ to your rig. In testing, the pedal added just the right dimension to almost anything played on the cleaner side of the gain spectrum, putting in a little tube “sag” for taste. Strats and P90-fitted axes really loved the Morning Glory, which brought out all sorts of chewy, funky single-coil tones. Again, a nice little bit of grit, but with much of the test guitars’ personalities coming through. Also admirable is the lack of hype here – the Morning Glory is an honest tone tool that works to improve tone, headroom, and dynamics. Add in true-bypass switching and road-ready construction on both the SuperBolt and the Morning Glory, and you have a pair of winners from JHS. The hard part is deciding which one you want.