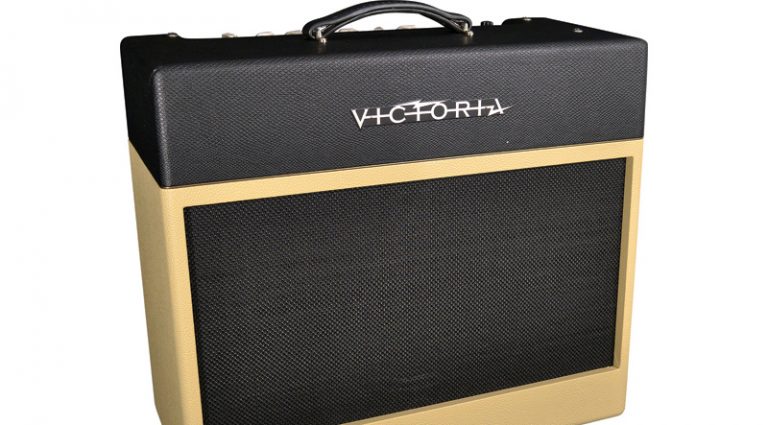 For nearly 20 years, Victoria Amplifier Company has been making head-turning retro-styled amps. Mark Baier and his crew recently introduced the Silver Sonic, a lower-watt version of their popular Golden Melody amp that pulls together a host of features and circuit cues from the golden era of tweed amps.

The Silver Sonic sports an elegant late-’40s/early-’50s vibe, with a masterfully executed black/tan Tolex over a finger-jointed pine cabinet (a black/sonic blue covering is also available). There’s a speckled silver/gray control panel with white chickenhead knobs, and a leather handle. The cabinet houses a 12″ Eminence Legend speaker mounted to a traditional 3/8″ hardboard baffle. The circuit layout follows the classic 5F6-A design of the Fender Bassman, with the addition of reverb and tremolo. It includes a Sovtek GZ34 rectifier tube, a matched pair of Tung-Sol 6V6 power tubes producing 14 watts, and a mix of Tung-Sol 12AX7 and NOS 12AT7 preamp tubes. Under the hood of the Silver Sonic is a point-to-point wired circuit with custom Orange Drop capacitors, U.S.-made resistors, cloth-covered wire, and custom-wound transformers, all meticulously installed on eyelet boards in a steel chassis. The workmanship is admirable.

Given a run with a recent-reissue Fender Jaguar and Strat, the Silver Sonic’s three-band tone stack offered very musical control over the amp’s sound without over coloring the natural tone of each guitar; this makes it quick and easy to dial in a sound for each. The sound is saturated with overtones and complex harmonics, with a natural chime to the highs and punchy mids and lows. The front end of the amp is very sensitive to touch and pick attack, which lets players dig in for a bit of bark and overdrive at lower volumes, and thick overdrive with the Volume turned up and the power amp section starting to sag. The Eminence Legend is a great choice for this amp, hearty enough to handle the punchy low-end without getting flabby, yet still articulate and transparent enough to reproduce the amp’s complex mids and highs.

Whether with the Strat or the Jag, the amp’s tone was natural, allowing the neck pickups to exhibit their natural, throaty tone, the bridge pickups to be bright and punchy without being harsh, and middle positions to jangle. The front end of the reverb circuit made a nice, wet slap, then trailed off with good saturation that just begged for surf licks. While the reverb sound was big and in-your-face, there’s a sweet spot on the control where we were able to dial in a splash, just to add ambiance. The Harmonic Filter Vibrato circuit didn’t take a back seat to the reverb; it, too, had a spacious sound with a warm, thick swell and a three-dimensional pitch-shifting quality (accomplished by inverting the phase of the highs from the lows via a filtering circuit in the tremolo). The amp’s lower-wattage Bassman-style circuit (using 6V6s instead of 6L6s) further allowed dialing in a big sound with attitude at a lower volume.

The Victoria Silver Sonic offers a bevy of features and sounds from classic ’50s and ’60s amps, wrapped in one high-quality combo. With its harmonically rich tone, big reverb, thick tremolo, and killer aesthetic vibe, it’s an intoxicating package.