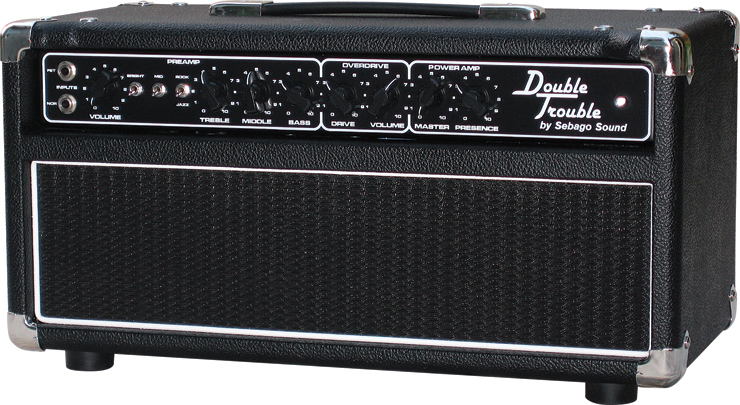 The DT50 is the 50-watt version of Sebago Sound’s acclaime d Double Trouble amp line. Its mission? To capture classic Texas tone – and then some.

The DT50 is packed with many high-end features that complement the quality tube tone provided by its circuitry.

From left to right across the front panel, the first features one sees are two input jacks; Normal connects the guitar directly to the first tube stage, while the FET input inserts a transistor gain stage before the first tube. The FET can be used to add gain to either the clean or Overdrive channel, while also providing the extra gain some piezo-electric guitars need. Most of the time, however, Normal will serve just fine. It should be noted that the DT50 employs four cascading gain stages fueled by three 12AX7 preamp tubes and two 6L6 power tubes. The first two stages are used for the clean channel and, when the Overdrive channel is activated, these first two gain stages are fed into the final two gain stages, for maximum crunchola.

Following the two input jacks on the front panel is the preamp’s Volume knob succeeded by three mini-switches and three EQ knobs; Treble, Middle, and Bass. The first mini-switch is a Bright switch, which boosts the top end. The second is a Mid boost, which bumps up mid frequencies. The final is a Mode switch, which chooses between Jazz and Rock voices. When the Rock mode is selected, there is a boost in the mid frequencies. As a result, the Bass and Middle knobs become less responsive, because the boost in gain is achieved by partly bypassing the tone stack. Jazz mode is considered the norm, while Rock is activated only when a higher degree of gain is needed. 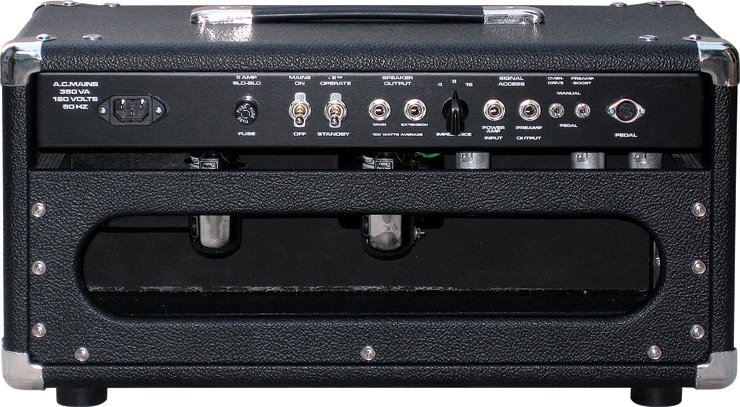 On the back of the DT50 are a standard on/off switch, standby switch, and two speaker outputs wired in parallel. A selector switch allows the user to choose between 4, 8, and 16 Ohms. There’s also an unbuffered effects loop labeled Signal Access. By connecting the Preamp Output jack to the input of an effects signal chain and the Power Amp Input jack to the output of that signal chain, a user is able to insert effects between the preamp and power section, which is particularly useful for time-based effects, which can sound mushy when plugged into an overdriven amp. Finally, there are two mini-switches and the input jack for the DT50’s pedal. The switches select whether or not the Boost and Overdrive functions are activated manually via the front panel or using the footswitch.

We tested the DT50 with a Strat and Les Paul through a 2×12 cabinet. Playing with DT50 in Jazz mode on the clean channel, the clean tone was reminiscent of Fender blackface combos, without the overwhelming brightness sometimes associated with those amps. The clean sound was full, rich, and responsive to pick dynamics. The Bright and Mid mini-switches are effective for precisely dialing in tone. The Overdrive channel was also impressive. The Drive and Volume knobs provide a range of possibilities ranging from gritty blues-rock tone in Stevie Ray territory to hot-rodded distortion. With the Drive at about 3 o’clock and the Volume dimed, we got tones eerily close to Paranoid-era Tony Iommi. And with the Drive maxed out and the Volume and Mids scooped a bit, the amp can do convincing metal sounds.

We were happily surprised at the versatility and dynamic tone offered by the DT50. It’s a powerful workhorse.