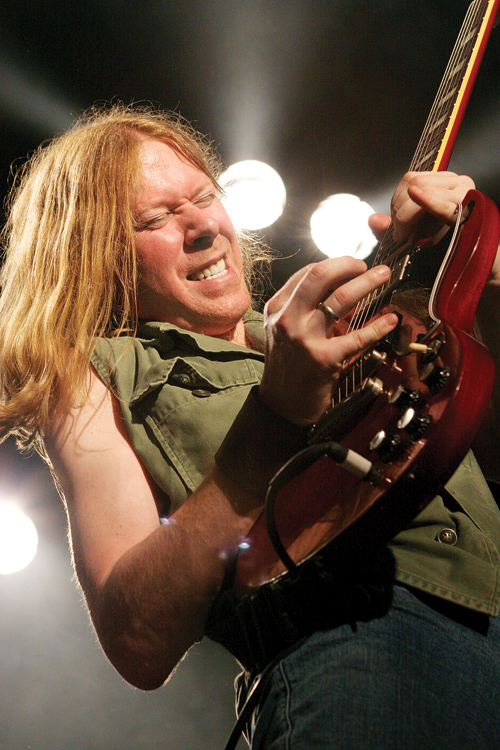 Since he arrived in Los Angeles in 2010, it’s been “all systems go” for former Monster Magnet guitarist Ed Mundell.

After 19 years with the band, Mundell moved west from New Jersey to launch a new phase of his career. His latest project, the Ultra Electric Mega Galactic, is a hard-chargin’ instrumental space rock trio with bassist Collyn McCoy and drummer Rick Ferrante. Much like his previous non-Magnet project, The Atomic Bitchwax, it puts a welcome bead-like focus on Mundell’s Hendrixian fuzzed Strat “magick.” Its self-titled debut was released on the guitarist’s own Orbit Unlimited label.

How’d you hook up with Collyn and Rick for the UEMG?
Rick and I met a few years ago at a Nashville Pussy show. I had just gotten married and moved to L.A. when Rick and I decided to jam. He introduced me to Collyn, an absolutely amazing bass player. We didn’t intend to make a record, but songs formed from our 20-minute jams.

Did you originally intend to keep things all-instrumental, or did the right singer just never materialize?
I got sick of working with singers and the approach to recording with a singer and the egos that go along with it. I’ve worked with some great vocalists such as (Monster Magnet’s) Dave Wyndorf, but I’ve worked with some really limited vocalists. I had to take a break. That said, Collyn plans to sing on the next album. He has an amazing voice – picture Lemmy mixed with Phil Lynott and Ozzy Osbourne!

Did you do anything differently in the studio compared to your work with Monster Magnet?
I approached it totally differently. With Magnet, we would spend 12 hours a day analyzing two or three notes, and I recorded scratch tracks that were never kept. This time, we recorded live and layered parts on the live tracks, so any extra guitars you hear are added after the fact. It felt more organic and retained the spontaneous nature of a band playing together. It’s the first time I ever kept scratch guitar tracks.

What were your main guitars, amps, and pedals on the new album?
For guitar, mainly my Angry Angus Strat copy. It’s been my main guitar since I found it. For leads, I used the sunburst Strat Plus I’ve had since 1992. For doubling rhythm tracks, I used a ’62 reissue SG and an SG-X with a P-94 pickup.

For amps, the 1976 Orange 120-watt Overdrive I’ve been using since ’92 through a Marshall Jubilee 1987 cabinet. For pedals, I used a KR Musical Products Mega-Vibe and my signature Creepy Fingers Infinity Fuzz pedal, plus a Geoffrey Teese Real McCoy wah, a Fuzz Face, an Analog Man ARDX20 Dual Analog Delay, and an Electro-Harmonix Stereo Memory Man Digital Delay/Looper for backwards effects.

Were you specifically looking for an Angry Angus, or did you stumble upon it?
My wife, Karen, was working in Montreal, and I visited for a couple weeks. I didn’t have a guitar with me, but I would visit this one shop every day to try guitars and pedals. I kept coming back to this black Angry Angus with a maple neck. They also had a sunburst version with a rosewood neck, but I liked the maple better. The guitar spoke to me.

What’s the story on your signature Infinity Fuzz pedal?
The Infinity Fuzz is basically my version of a Fuzz Face produced with Brad Davis, from Creepy Fingers, who came up with the circuit design. I wanted a Fuzz Face without the headroom headaches that come with a Fuzz Face. I use it all the time.

How did you find Matt Lynch and Mysterious Mammals Studio?
We discovered them through Eddie Glass and Nebula. Then I recorded some guest guitar tracks there with the band Abrahma, and Matt and I worked really well together. I love the fact that he works really fast. He’s like me – get in and get out! I like capturing the initial vibe, not over-working a song.

The sitar on “The Man With A Thousand Names” is a cool psychedelic touch.
I did the “backward” sitar and Collyn doubled his bass lines with sitar. I used DADADD tuning, which makes everything sound great!

Sci-fi writer Harlan Ellison opens the CD with a spoken-word piece. How’d you connect with him?
I am a huge sci-fi fan and an avid reader of ’40s, ’50s and ’60s sci fi. Collyn just happened to know Harlan Ellison, and Harlan agreed to do the spoken word only if I would do backwards guitar on it. He is a big supporter of the band.

Your website lists a solo album release in 2013. Is that still on track?
Yes. I’ve been working on it for years and have tons of material. I want to have friends and guests play on it. I’ll also be releasing it on my own label.