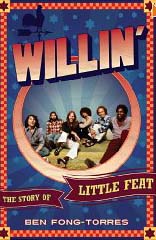 That Lowell George could play the guitar has never been in dispute. But most of the rest of the story of Little Feat is.

To start with, no one can quite agree on how the band’s name originated, and it only gets more convoluted from there. That only makes the band’s story – or we should say “stories” – all the more intriguing.

Rolling Stone vet Ben Fong-Torres takes it all in stride with a wink and a knowing grin. Amassing numerous interviews with band members, compatriots, and hangers-on, he’s dug deep to ﬁnd and present the various takes on everything from the band’s origins to who was smoking what when. The result is an enticing, entertaining read.

And that’s only ﬁtting for a band that produced such glorious music during such a short time under George’s leadership. Fong-Torres naturally focuses much of the story on George – his slide and fretted guitar skills, his stellar songwriting, and his charismatic, humor-loving, and, at times, dark personality. But he also makes sense of the numerous band lineups and its ongoing legacy.

As a band back in the day, Little Feat might have had a tough time agreeing on much. But as on the refrain to “Dixie Chicken,” they could all put it together to harmonize and sing along.

Amy Lennard – I Need To Love