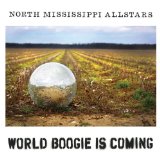 If anybody is keeping the raw spirit of the blues alive, it’s the North Mississippi Allstars. And this new album is guitarist Luther Dickinson’s reafﬁrmation to honor his elders and keep the traditional integrity of North Mississippi blues vibrant, primitive, and thriving. It’s also the soundtrack to his brother Cody Dickinson’s ﬁlm about modern Mississippi.

This is a raw, ethnic record packed full of earthy slide guitar, unintelligible drawls, and the strongest Hill Country inﬂuence on any NMA album. The R.L. Burnside presence is strong, particularly on “Get The Snakes Out The Woods” and “Snake Drive,” with the late master’s sons Garry and Duwayne Burnside making an appearance.

The rural gutbucket feel is offset by inspired electric guitar sounds by Dickinson. It also features a harmonica solo by Robert Plant on “Goat Meat.” Other guests include Lightnin’ Malcolm, the London Souls, Sharde Thomas, and Alvin Youngblood Hart. Willie Dixon’s “My Babe” is played with unadulterated humanity, while Bukka White’s “World Boogie” is Dickinson at his nastiest.

World Boogie Is Coming is an auditory taste of the deep South and a dissertation on the glories of the one-chord boogie.

Jeff Golub – Do It Again