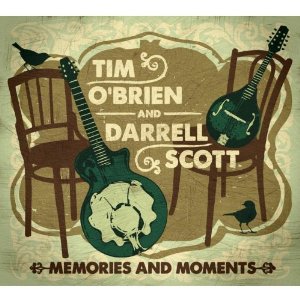 Playing seemingly anything with strings (including piano strings), the cumulative session credits of O’Brien and Scott include Suzy Boggus, Steve Earle, Trisha Yearwood, Mark Knopﬂer, Joan Baez, the Chieftains, and countless others. The ﬁfty-somethings’ songs have been recorded by the Dixie Chicks, Garth Brooks, Tim McGraw, and others, with Scott’s classic “You’ll Never Leave Harlan Alive” cut by Brad Paisley, Patty Loveless, and Kathy Mattea.

The best by-product of their behind-the-scenes successes are the solo albums they’ve allowed them to release, along with 2012’s duo album We’re Usually A Lot Better Than This.

After playing in high school rock bands, O’Brien formed the popular bluegrass quartet Hot Rize, while Scott grew up playing country behind his father, Wayne Scott (whose This Weary Way he produced and played on with a cast of Nashville’s best).

The duo cover Hank Williams, George Jones, and John Prine songs (the latter’s composer lending a vocal cameo). These, and their originals, all feature powerful vocals and are backed by banjo, Dobro, bouzouki, mandolin, ﬁddle, piano, and acoustic, resonator, and baritone guitars – as interchangeable as they are ﬁrst-rate. Rather than creating an overdubbed “studio band,” each song is cut as a two-instrument duo. The effect is often chilling, always intimate.

It just doesn’t get any better than this.

Vance Gilbert – Up On Rockfield