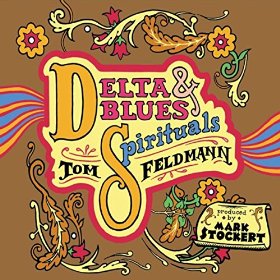 Everyday you hear someone who claims to have the blues. But if you’re going to revive the old songs once again for the umpteenth time, you better have something new to add.

Tom Feldmann is based in a small Minnesota town of white picket fences, Lutheran churches, and dairy princesses, all of which seems about as far from the Mississippi Delta as one can reasonably get. Yet he’s become one of our most accomplished scholars of the classic blues – and not as your typical, buttoned-down historian.

Feldmann has spent untold hours dissecting original recordings by everyone from Charley Patton to Skip James, Bukka White to – yes, of course – Robert Johnson. His series of intensive how-to DVDs are stunning PhD theses on how to play these intricate styles.

So when Feldmann releases a new album of his own versions of 13 classics, it’s certainly time for a listen.

Delta Blues & Spirituals never disappoints. Feldmann doesn’t so much play the blues as channel them. No, there’s none of the faked anguish and faux soulful moaning of the cruise-boat bluesmen. He plays these songs with devotion and care.

His take on White’s trademark “Aberdeen Mississippi Blues” is a prime example. This isn’t a note-for-note, growl-for-growl recreation of the original. Instead, he plays with a deep love for the details of the original while still making the songs sound fresh and – most importantly – alive.

Feldmann’s guitar playing is glorious. From his National resonator slidework to his picked acoustic guitar, the well-honed details, fills, and syncopated beats are stunning. And you can hear it all, thanks to the quality of the recording.
Produced by Mark Stockert and cut to tape in a living-room studio, the sound is wondrous – warm and intimate.

Yes, there are some oft-heard standards here, such as Patton’s “Pony Blues.” But most of the tunes are more obscure, such as the gospel classic “Jesus On The Mainline,” Tommy Johnson’s “Lonesome Home Blues,” and Blind Willie Johnson’s otherworldly “Dark Was The Night, Cold Was The Ground.”

If you’re fan of the deep blues – or even of just fine guitar playing – you owe it to yourself to take a listen.