Home Music Song of the South 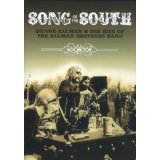 You’re always taking a chance with a DVD that concerns a band and yet none of the band members take part in the production. That’s the case here. While there are no Allman interviews, we do hear from numerous critics, writers, and more importantly, former friends, bandmates, and Willie Perkins, the Allmans’ road manager during their heyday.

Most enlightening are comments from Perkins as well as Paul Hornsby and Pete Carr who were members of the band that preceded the Allman Brothers, the Hour Glass, and members of the famed Muscle Shoals Rhythm Section that included Duane Allman for a short period. Those comments paint Duane as a uniquely gifted musician who had a singular purpose of making great music with what he felt was family. There are also some nice clips from the Allmans’ Fillmore appearances.

On the negative side there are odd shots like a construction site when “Sweet Little Angel” by the Hourglass is playing, stock footage in other words to have something underneath.

What this DVD will do is reinforce what fans already know – that Duane Allman ranks with the giants of rock guitar and that the original band was one of the best blues-rock bands in history.