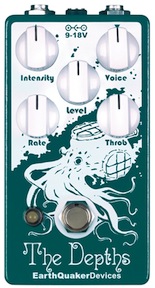 EarthQuaker Devices’ The Depths pedal has an optical vibe circuit the company says delivers a three-dimensional swirling sound optimized to work with all types of pickups. It has controls for Voice, Throb, Intensity, Rate, and Level. It can be powered by 9-volt battery or a wall adapter up to 18 volts. The EarthQuaker Arpanoid Polyphonic Pitch Arpeggiator has eight expandable modes and works on chords as well as single notes. Modes range from one octave down through one octave up on the root note and random mode in both major and minor keys. 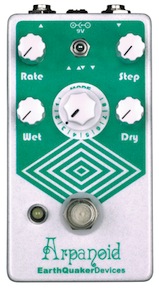 The Step control selects the number of notes in the sequence, Rate adjusts speed of the cycle, a toggle changes the direction of the cycle, and the Wet and Dry controls adjust levels and mix. EarthQuaker pedals are all-analog, true-bypass, and handmade in Ohio. Learn more at earthquakerdevices.com.