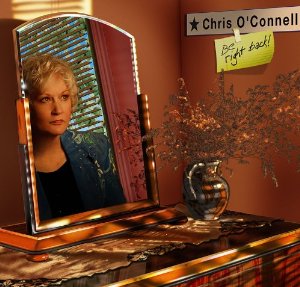 Finally! At last! Considering that she made her recording debut in 1973 with Asleep at the Wheel’s maiden voyage, it’s amazing that it’s taken nearly 40 years for Chris O’Connell to release her ﬁrst solo album.

During the Wheel’s zenith, she dueted with leader Ray Benson on “The Letter That Johnny Walker Read,” managed to outdo Toussaint McCall’s original on the R&B ballad “Nothing Takes The Place Of You,” swung like crazy on “Song Of The Wanderer,” and took a backseat to no one on Irma Thomas’ “Ruler Of My Heart.” If the Wheel had been dubbed the Chris O’Connell Band, instead of being one spoke of a multi-pronged whole, she would’ve probably been recognized for what she was – the greatest female country singer of her generation.

There are at least six Wheel alumni here, including co-producer Danny Levin, and ex-Wheelers Leroy Preston and Brenda Burns contribute songs, but this CD is all O’Connell. As such, the repertoire ranges from Johnny Paycheck country to Rodgers and Hart and Irving Berlin standards, from the Elvis hit “(Marie’s The Name) His Latest Flame” to a striking rendition of the folk song “Shenandoah” – which is exactly what O’Connell fans have been waiting for: an album that shows her interpretive mastery, able to meld disparate elements into a cohesive experience.

A great rhythm guitarist in the mold of Eldon Shamblin or Freddie Green, O’Connell is surrounded by such superb six-stringers as co-producer Don Margraf, Cindy Cashdollar on Dobro, Bill Kirchen on baritone on “My Baby Don’t Love Me Anymore” (featuring Junior Brown’s hot licks), Derek O’Brien adding some jump blues, Noah Jeffries’ flat-top flatpicking, and Carter Arrington’s tasty electric. The only quibble is multi-instrumentalist Levin’s organ on some cuts. It may be stylistically accurate, but it’s distracting – even in a set where Joel Guzman plays bossa nova accordion.

It took a long time, but O’Connell proves she’s more than just a great female country singer. Male, female, country, or anything else, she’s simply one of the best singers around.

The Jayhawks – Sound of Lies