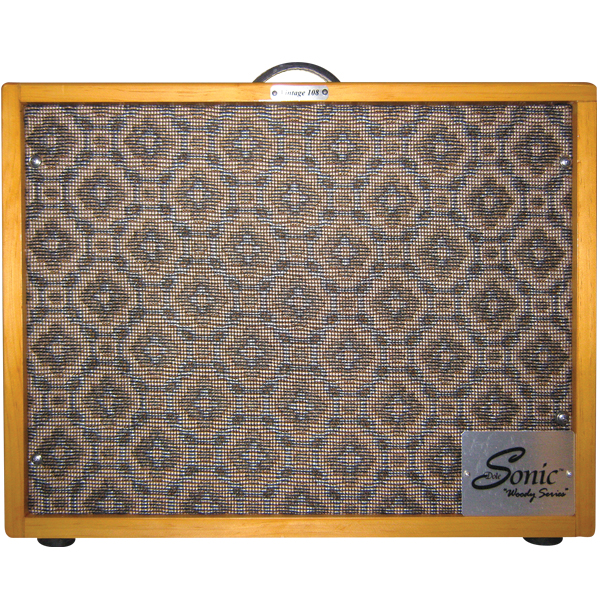 The guitarist’s greatest quests is most often that of the tone that resides within their heads. That quest drove guitarist Ken Doles to design his own amplifier.

The tone in his head was a mix of vintage sound with new ideas, and the result is the DoleSonic Vintage 108. A hand-wired, Class A combo in a deftly crafted pine cabinet, it’s aesthetically reminiscent of an antique radio or armoire, with an amber-tinted finish and hand-assembled internal bracing that denotes a commitment to detail. A 3/4″ birch baffleboard, leather handles, and vintage-inspired grillecloth further enhance its class.

The Vintage 108 is set apart in another way – speaker configuration. At first glance, it looks like a single-speaker combo, but inside are two Jensen Vintage Series speakers – a C10Q in an unusual combination with a C8R. The amp can be used with both on or, due to the angle in which they fit in the cab, you can disengage either for a low-watt fiesta.

The cathode-biased, 8-watt R.M.S. amp treads into more new territory with its use of tubes. The stock model uses a pair of JJ 6V6s, a single JJ 12AX7, and a 5Y3 N.O.S. rectifier. Tube selection, alone, would serve most playing styles, but the customization options on the Vintage 108 allow for the use of a single 6L6, single 6V6, or a single EL34 with minor modifications from a qualified technician. While these features may seem complex, in some ways, the Vintage 108 is a straightforward amp; controls include a single Volume and Tone, and components are high-grade throughout, with point-to-point construction and a two-way switch for choosing between 4 and 8 ohms output.

Live and in the studio, the Vintage 108 rendered a surprising variety of tones given that it has only two knobs. Plus, its combination of 8″ and 10″ speakers give it a different voice – warm, full-range, and useful for a variety of styles. Its diversity goes even further when one experiments by unplugging either speaker. Using the 10″ speaker alone produces a robust low-end; changing the impedance and running the 8″ alone makes the amp sound a Fender Champ on steroids.

At the end of the day, the Vintage 108 achieves Doles’ goal – it’s an amp made with vintage inspiration, but is ready for a variety of musical situations and genres.