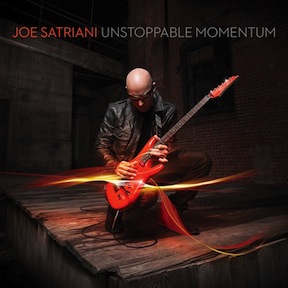 Joe Satriani will release his 14th studio album, Unstoppable Momentum, on May 7.  The album was recorded at Skywalker Sound in the Bay Area, produced by Satriani and Mike Fraser (AC/DC), and features Vinnie Colauita (Sting, Jeff Beck) on drums, Chris Chaney (Janes Addiction) on bass, and Mike Keneally (Dethklok) on keyboards.

Eleven songs were selected, all “heading in different directions and touching on a variety of musical influences,” said Satriani.  With that in mind, he assembled a new studio band.  “The idea was to crank up the energy level of the sessions, and allow for more individual expression of the material from each player.  The chemistry with Mike, Chris and Vinnie was fantastic and we blazed through all of the tracks with everyone laying down amazing performances.” Learn more at satriani.com.