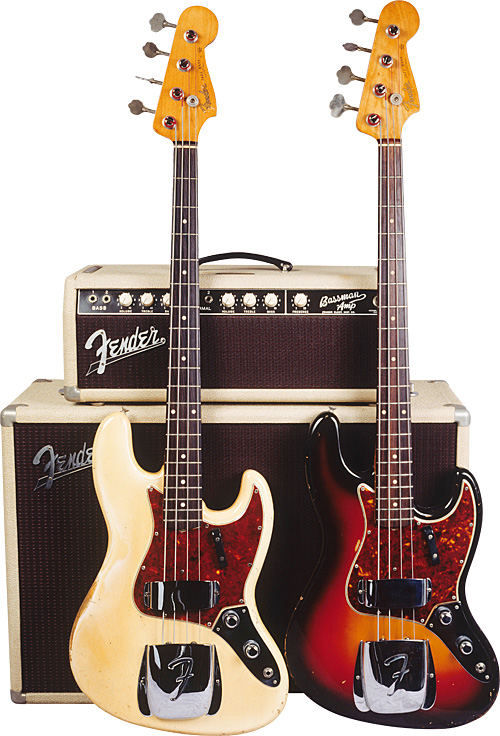 “Stack-knob” is a catch phrase that for decades has perked the ears of collectors; these relatively rare examples of the earliest Fender Jazz Bass are among the first electric basses to be “collected” instead of just bought, sold, and played! Along with the ’50s Precision, they stand as the ultimate Fender bass – sought for their tone, feel, and aura of cool. Built during the transition between the ’50s and ’60s, they combine the craftsmanship of Fender’s pre-guitar boom period with the modern look.

Nobody knows how many Jazz basses were made before Fender switched to the three-knob configuration, but, as a new and more-expensive model in an era when the electric was considered an illegitimate upstart, the Jazz took time to establish itself as a popular alternative. The number of extant examples is small compared to the number of surviving early-’60s Precisions.

Fender took its time getting a second bass to market. The Precision had been an increasingly familiar sight for about eight years before the Jazz made its debut. Basses from Gibson (the Electric Bass, or EB-1, followed by the semi-hollow EB-2) Rickenbacker (Model 4000), and companies like Kay must have shown Leo and his crew how the market for electric basses was big enough to include a “deluxe” model. Instead of simply updating its one model, as Fender had done in ’54 and again in ’57, it decided to complement the Precision Bass with an upscale sister. Borrowing the new “Offset Contour” body from the Jazzmaster but keeping the long “horns” needed to balance a bass neck, Fender created a beautiful and harmonious design. The pickups were new, keeping the dual polepieces from the ’57 Precision, but with narrower, more-focused field. The stacked knobs gave individual Tone and Volume controls for each pickup – a novel feature for a bass at the time. The three-knob configuration was at the prototype stage, but got the commercial nod, only to be discontinued within two years. A 1960 Fender catalog bound into the July 21 issue of Down Beat shows on its cover what appears to be a three-knob Jazz with a ‘50s-style Fender logo. The bass in the catalog, and the ad in the January ’61 International Musician, is a stack-knob with no logo. Other distinctive “stack” features include the adjustable mute pads under the chrome tailpiece, prominently featured in promotional literature (but eventually removed by most players), the “patent pending” fine print on the headstock decal, and – on the earliest examples – the beloved “’50s bump” on tthe lower cutaway. Fender also promoted the new narrower neck as permitting “rapid technique” – one wonders if a young Jaco Pastorious took this to heart. The original catalog blurb for the Jazz says, “this… is the standard by which others will be compared” and for once a bit of ad copy has held true through the years! The early Jazz is still the standard by which any electric bass can be judged, and most are found wanting.

This article originally appeared in Vintage Guitar Classics No. 2 issue. All copyrights are by the author and Vintage Guitar magazine. Unauthorized replication or use is strictly prohibited.