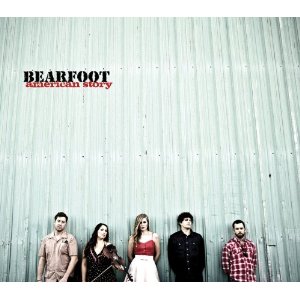 The teenagers who began the Bearfoot Bluegrass Band in 2006 have matured into young adults. As they’ve matured, so has their music. Even their name has changed slightly; it’s been shortened to Bearfoot.

Struthers’ career has been on a steady ascent since her 2010 solo album. American Story features songs she co-wrote with Claire Lynch and Tim O’Brien – pretty heady company. Besides her songwriting skills, Struthers has a soaring soprano, which melds beautifully with Grebe’s and Oudean’s voices – clearly evidenced on the opening “Tell Me A Story,” which combines sensibilities of the old Bearfoot Bluegrass with more pop and folk musical textures.

Manned by veteran producer/engineer Brent Truitt, the overall sound is ﬁnely honed without being overly slick. Players such as banjo virtuoso Charlie Cushman add some additional parts, but between Oudean’s hot fiddle and Norris’ fiery mandolin, most of the solos are covered nicely by Bearfoot without the need for hired guns.

As young players grounded in bluegrass basics create their own new music, it will keep growing and changing. Bearfoot’s American Story establishes them as one of an exciting new generation of bands dedicated to preserving bluegrass energy while creating a new synthesis of roots with more modern inﬂuences. Their results warrant a far wider audience, and this is the perfect album for accomplishing that goal.