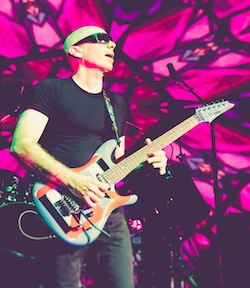 Joe Satriani has announced that Living Colour will support him on the West Coast leg of his upcoming U.S. tour, beginning in Seattle October 22 and concluding October 26 at the Fox Theater, in Oakland. The tour launches August 29 in San Diego, with Steve Morse as support on the first leg. Satriani’s band includes Mike Keneally on keyboards, bassist Bryan Beller, and drummer Marco Minnemann. They recently a two-month European tour of 17 countries.

Satriani will play the National Anthem at this year’s U.S. Grand Prix at Laguna Seca, performing from the track prior to the July 21 MotoGP World Championship race. For more, go to satriani.com.