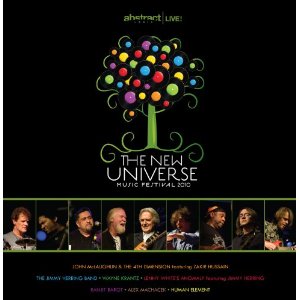 This double-disc contains some of the most challenging guitar music recorded in the past year. While the four featured guitarists – Alex Machacek, Wayne Krantz, Jimmy Herring, and John McLaughlin – all shine, it’s Krantz who really steals the show.

It opens with two cuts from Machacek, an Austrian fusion player who shows a penchant for frenetic tempos and soaring solos. His solo in “Very Sad” is intriguing for its use of hard punches and volume swells. Next, veteran Jimmy Herring dazzles on ﬁve cuts. His solo on “Rainbow” seems to ﬂy in, sounding like an airplane taking off. He and the band (bassist Neal Fountain, keyboardist Matt Slocum, and drummer Jeff Sipe) turn in an amazing version of the Beatles’ “Within You, Without You,” with Herring playing the familiar melody with volume swells and wang bar manipulations. McLaughlin is the headliner, and he doesn’t disappoint. Two cuts, including a 20-minute “Mother Tongues,” show his legendary chops in a comfortable setting.

Krantz is featured as a guest on one cut and has his own tune, “Why,” with Anthony Jackson on bass. Dissonant spikes of chords, dazzling jazz runs, and funky pop/rock licks all meld together as one when he plays. It’s a pity his playing may be too eccentric for some, limiting his following more than his talents warrant.