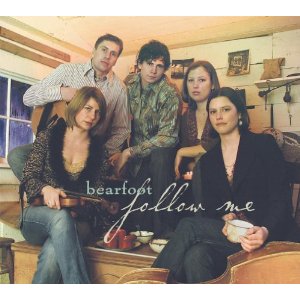 Bluegrass bands are often male-only affairs. But the women in Bearfoot Bluegrass are in a majority position. Annalisa Tornfelt plays fiddle, sings lead, and is responsible for seven of the songs. Kate Hamre plays bass and sings tenor vocals, while Angela Oudean plays fiddle and handles baritone vocal parts. The men in the band are Jason Norris (guitar and vocals) and Mike Mickelson (guitar and vocals). From the opening song, a Tornfelt original called “Molasses,” the band’s tight three-part harmonies and intertwined twin-fiddle leads make their sound infectiously unique. The second song, a Western swing-influenced original, “Go On Home,” displays the band’s musical breadth. Tornfelt’s powerful vocals coupled with the tasteful guitar, mandolin, and bass solos make this song special.

All the band members hail from Alaska, where they met at music camps. It would be presumptuous to say Bearfoot sounds “Alaskan,” but they do have an approach that is markedly different from Southern or New England bluegrass bands; more old-timey and Celtic, with a greater emphasis on folky euphony. Bearfoot isn’t about hard-driving rhythm. Instead their versions of traditional songs, such as Alton Delmore’s “Deep River Blues,” lean on the swing and shuffle side of the tune.

Produced by Nashville Bluegrass Band alumni Gene Libbea, recorded in Denver at Notably Fine Audio, and mixed by veteran location engineer James Tuttle, Follow Me retains the feeling of a live performance rather than a studio effort. Bearfoot Bluegrass has a refreshing approach to bluegrass that should appeal to young and old alike.