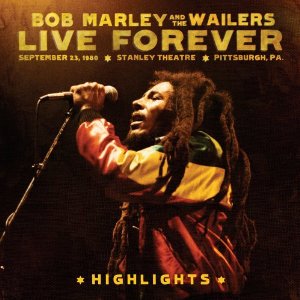 For such a guitar-driven genre, reggae doesn’t get many props from the six-string community, though its offbeat-chord trademark is as much a part of the rock lexicon as anything. For proof, check out this two-disc set from Bob Marley. This long-bootlegged album is Marley’s last live recording prior to his death in 1981, and it’s a keeper.

Terminally ill with brain cancer at the time, Marley is in remarkably good form here, as is his smokin’ band, the Wailers. Guitarists Junior Marvin and Al Anderson supplement Marley’s rhythm work with intricate grooves, but the axemen let loose on some rock solos, too – witness Marvin’s fat, overdriven solos on “The Heathen” and check out the Claptonesque lead to “No Woman, No Cry.” And a Santana inﬂuence appears in the solo to “Is This Love?,” one of Marley’s most beautiful songs. And again, every track has wonderful rhythm work from all three guitarists. In all, Live in Pittsburgh is a joyous, groove-ﬁlled legacy for Marley and his band. Granted, the occasional presence of synthesizers dates it a bit, but overall, an exuberant ﬁnal performance that’s worth your listening time.