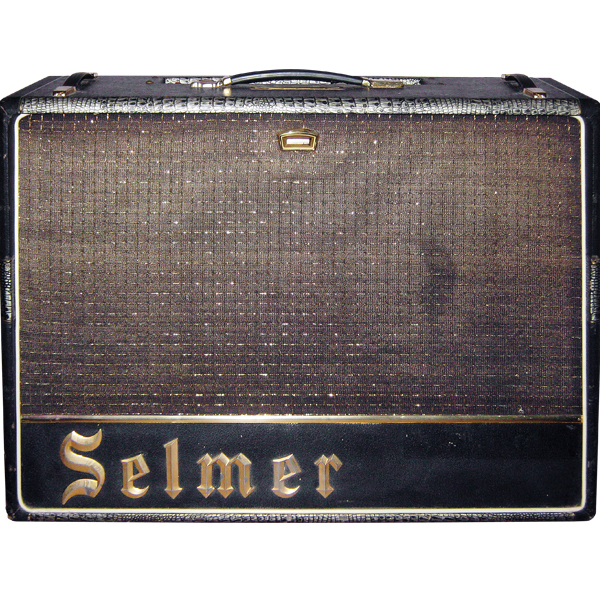 An amp maker at the very heart of the British guitar boom of the late ’50s and early ’60s, Selmer was, for a time, the leader in the field, though it’s all too easy to forget. Briefly ahead of Vox, certainly ahead of the fledgling Marshall, this was a company that had it all to lose as the new decade dawned… and gradually did.

By the mid ’60s, Selmer was struggling for position against a pair of strong rivals with growing international reputations, while releasing what would be its most recognized and most collectible models – the short-lived crock-skin combos of 1963 to ’65. The most popular of these, the Zodiac Twin 30 and Zodiac Twin 50, were most likely released in direct response to the Vox AC30 and Marshall Model 1962 (a.k.a. “Bluesbreaker”) respectively. Good efforts they were, too. But while they made some waves at the time, they ultimately failed to blow either rival out of the water and did little across the pond, to boot. In the wake of this “defeat,” Selmer amps, though still great by any standard, slid into B-list status and started down the slippery road toward demise.

Regardless, models of all eras have continued to appeal to players and collectors for five decades, but fans are likely to drool most profusely over the combos like this 1964 Zodiac Twin 50. Owned by ex-Iron Maiden and Praying Mantis guitarist Rob “Angelo” Sawyer, this is a fairly rare example, certainly in this condition. More often seen is the Zodiac 30, a combo based around a pair of cathode-biased EL34s, nominally what we refer to as “class A,” as famously used by Jack White to record the White Stripe’s Elephant album. Changing the output stage from cathode-biased to grid-biased (a.k.a. “fixed-biased”) earned the Zodiac Twin 50, introduced in the early part of 1964, a few more watts than its class-A sibling. While this increase in power might not have been tremendously obvious to the naked ear, the change in feel due to the firmer output stage and slightly increased headroom made it a different amp.

As often as these amps are compared to their above-named “rivals,” they have circuits that are all their own, being products of a company that prided itself on originality, was still aiming to be a leader in the field, and was nowhere near to putting out “copies” of other British makers’ products. Largely similar other than these differences in output tube bias, both Zodiac Twins have circuits that might appear quite unusual to players more familiar with the Vox, Marshall, or indeed Fender topologies, and that’s a big part of their appeal. Preamp and power amp are built on separate chassis, mounted in the top and bottom of the 2×12 cab, respectively. Each of two channels opens the gambit with a single ECC83 (12AX7) gain stage, without any cathode bypass cap, which keeps the tone a little tighter and lighter at this point, but the two differ considerably from there. Channel one, intended for a mic or a second instrument, runs through a treble-bleed tone control that’s a little more involved than the average, then a volume control, then through a second gain stage comprising an EF86 pentode preamp tube, before scooting on to the octal plug that takes it south to the PI and the output stage. Channel two, though, is where things really get wild. After the first gain stage, the signal hits a six-pushbutton tone section that offers, in addition to a Rotary Control option that routes it to another treble-bleed tone pot, buttons for High Treble, Treble, Medium, Bass, and Contra Bass. These are achieved by tapping a network of tone caps that shape the voice between gain stages, a circuit not unlike that of some large Gibson amps before it, or indeed the six-position rotary Tone control on the lead channel of the Matchless DC30 several decades later. From here, the signal hits another EF86 pentode, then a tremolo circuit with Speed and Depth controls, then on to the bottom chassis via the octal plug.

In the bottom chassis, the octal plug ferried the signal to a rather unusual split-phase inverter that employed another ECC83, then on to a pair of EL34s that were pushing around 445 volts DC at the plates – not a ton for these output tubes to handle, but pretty hot for the cathode-biased Zodiac Twin 30, which ran everything about the same as the 50. The alnico Celestion 12s of the Twin 30 were changed to more robust Goodmans ceramic 12s in the 50, but that’s about the only other difference between the two models. Later models, however, dropped both the tube rectifier (for solid state) and the EF86 preamp tubes (for more ECC83), making them more conventional in many respects.

Obviously, these mid-’60s Zodiacs looked very different from anything before, or after, too. Their blend of mock-crocodile and black vinyl covering gave them an extremely outré look, further accentuated by the spacey green “magic eye” tremolo speed indicator on the front, which pulsed in time to the trem rate. Even if the large gold metal Selmer badge on the bottom panel tied the amp to ubiquitous and less-than-hip trombone-case cosmetics, these were pretty outrageous packages, in an age and industry that was ramping up for plenty of outrage.

In addition to digging the looks (as he does those of some eight other Selmers in his collection), Sawyer admits to an unabashed fondness for the tone of the Zodiac Twin 50. “It has a feel and character all of its own,” he says. “The whole vibe is ‘warm,’ and I just love those pushbutton tones. The tremolo effect is great fun – pure Duane Eddy! It’s not an amp that I would gig with, because it’s too precious and beautiful, and because it doesn’t have the heavy rock/blues tone my band sound needs. But I really enjoy playing the Zodiac.”

As cool as these amps are – and as much as you might want one now – their prices have escalated significantly over the past decade to the point they rival vintage AC30s. A difficult situation for the would-be buyer of a nifty Zodiac Twin 50, but it brings some measure of justice to round out the history of these exquisite and unique “also-rans.”