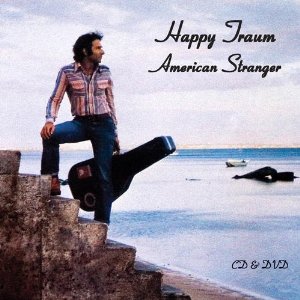 Resurrected from Stefan Grossman’s Kicking Mule label of the ’70s (1977, to be exact), Stranger was the followup to Traum’s solo debut, Relax Your Mind. In lieu of beefing up the 30-minute set with bonus tracks, the album is paired with a 13-song DVD of Traum in concert in ’81. Also, the CD includes a PDF tab booklet of the album’s arrangements.

Traum’s eclectic repertoire subtly showcases the versatility necessary to ricochet from Travis fingerpicking (“I Am A Pilgrim”) to flatpicking a fiddle tune (“Eighth Of January” – better known as “Battle Of New Orleans”) or combining the two on the title track
(a.k.a. “Plains Of Amerikee”).

Performances are either solo or small acoustic ensembles featuring the likes of John Sebastian (harmonica), Eric Weissberg (fiddle), and Roly Salley (bass), and the program closes in hootenanny fashion with a gospel sing-along, “I’ll Fly Away.”

The DVD presents Traum alone before an intimate audience. Roughly half of the tunes come from American Stranger, so it’s interesting to compare versions five years apart, played solo versus band.

A narrative segment offers a mini tour of Woodstock, where Traum and the instructional Homespun Tapes company he founded 44 years ago are based. Homespun is probably what Traum is best known for, but he is also an extremely engaging performer. The camera work offers an up-close glimpse of Happy’s playing, which, if anything, is more impressive than on the CD. When Traum dips into blues, like Charlie Patton’s “Dark Road Blues” or John Hurt’s “Monday Morning Blues,” he gives Geoff Muldaur a run for his money.