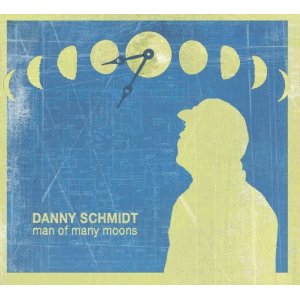 On his second Red House Records release, Danny Schmidt displays the same level of wit and lyricism that made his last release such an artistic success.

Undoubtedly, Schmidt writes great songs. Man of Many Moons includes 10 new originals and one cover – “Bucket of Rain” by Bob Dylan. His version of this rarely covered classic features his deftly fingerpicked guitar as well as a neat twist to the arrangement that luxuriates in the song’s euphonic qualities. Schmidt also slows the pace a smidgen, which gives it a more wistful character. Schmidt’s own songs share a certain kinship with the Dylan tune, a quirky melancholy that couples humor with sadness in a unique way.

On Man of Many Moons, Schmidt retains much of the alchemic musical formula that made his previous work so listenable. The arrangements are sparse, with no percussion. Schmidt plays acoustic guitar while Will Sexton adds bass and guitar, and Keith Gary plays piano. Raina Rose and Carrie Elkin contribute harmony vocals while singer/songwriter Ray Bonneville adds an occasional harmonica part. Using such a small group adds character and emotional impact.

Schmidt doesn’t have a conventionally beautiful voice. His delivery has a casual directness that penetrates to the emotional center of a song. As singer/songwriters go, they don’t get much better.