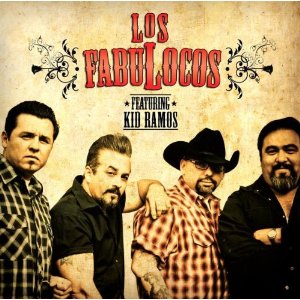 This second release from the Southern California band Los Fabulocos sizzles like a juicy steak fajita sprinkled with seasoning from rock, tejano, and country-western swing with a garnish of talent and high style.

Born of the rich and varied musical experiences of its members, the eight original tunes and a handful of covers are mostly boot-tapping uptempo numbers driven by Jesus Cuevas’ accordion and Kid Ramos’ tasty guitar work. Standout cuts include “The Vibe,” “Los Chucos Suaves” and a nifty cover of Little Richard’s “Keep a Knockin’” which features Ron Dziubla on saxophone and lyrics sung in Spanish, for an authentic feel.

Those familiar with Ramos’ know of his work with the Fabulous Thunderbirds and other acts, and often associate him with blues guitar. But his background is much wider and his chops are as much Tex-Mex as jazz-rooted and informed by the blues. All are displayed here; Ramos doesn’t often show his hand, keeping the rhythm and holding ﬂash to a minimum. It does sometimes show, like on the original “My Brother’s Keeper,” which not only has a great riff, but offers some very nice Telecaster tones and licks.

Still, this is very obviously a band record, where all players contribute rather than ﬁghting to be heard. They cook while letting the music do the talking and adding spice to an already thick Cali-Mex stew.

Eric Gales – That’s What I Am