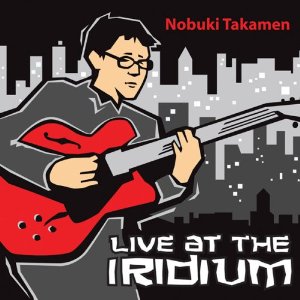 Takamen has become a mainstay in New York’s jazz clubs, and this record shows him to be a mature player with a keen sense of composition, considerable technical skill, and a supportive band (especially pianist Hitoshi Kanda) that helps bring Takamen’s compositions to fruition.

For a quick check of chops, just go to “14-1,” a bopper that finds him playing through the changes with ease. The middle section contains nice interplay with drummer Yutaka Uchida before Takamen wraps it with nice chord work. His ballad work gets a showing on “Smile,” with its chord intro that gives way to a precise melody, and his solo has a nice pop feel. Takamen is so conscious of melodies that even his solo on this one forms its own little melodies. “One Big Shot” finds the band navigating a frantic pace with humor and grace, and Takamen’s playing on the head uses single lines and octaves before a solo allows he and the band to show their empathy for each other’s playing. Things wrap up with “The Other Side of City,” an almost 14-minute tour de force that starts with 90 seconds of solo guitar before it turns into a light swinger that gives Takamen and Kanda time to build interesting solos. Takamen may only be in his early 30s, but shows maturity and skills that indicate he could remain a mainstay on the jazz scene for decades to come.