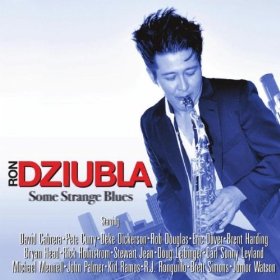 Lately, Dziubla (pronounced JOObluh) has become the saxophonist of choice for everyone from Ricky Martin to Duane Eddy – with sessions with Deke Dickerson, Elmore James, Jr. and the soundtrack to Burlesque along the way.

If this were Vintage Saxophone magazine, it would only be a matter of time until he graced the cover. Instead, his 11-instrumental CD deserves special attention, not because he also plays guitar (although he does, along with piano), but because he invited seven killer guitarists to the party.

Dzuibla has mastered that big Steve Douglas/Jim Horn honk (no wonder Eddy loves him), not to mention that of their predecessors, like Joe Houston, Clifford Scott, and Chuck Higgins. On the aptly titled “PCH Hit And Run,” sounding like a race winding down the Pacific Coast Highway (at night), he enlists Martin’s musical director, David Cabrera, whose fleet-fingered guitar perfectly complements Ron’s tenor/ baritone harmonized sustain. Also from Martin’s band, R.J. Ronquillo shows an obvious debt to Peter Green on “Shakedown Sunset Boulevard,” a stroll sort of like “Rumble” on its side.

A great self-produced collection of vintage/timeless rock and roll and, yes, some strangely appealing blues.

Dave Hole – Outside Looking In