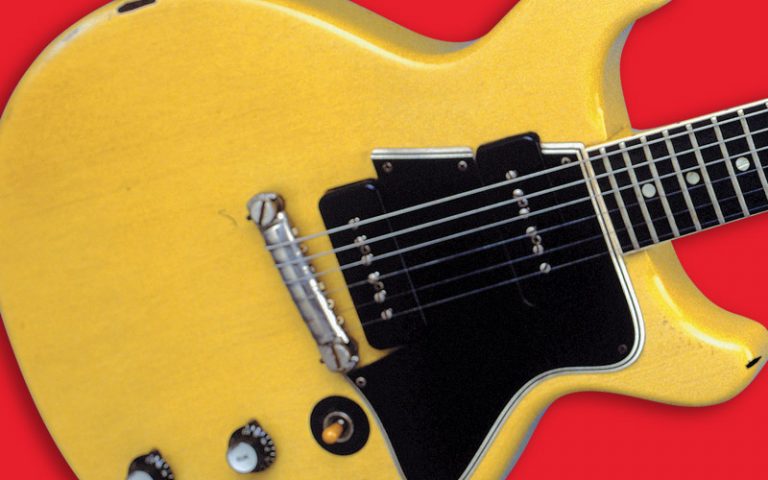 Gibson’s Les Paul Special was the last of the original Les Paul “family” of guitars introduced, and it was the first to lose the Les Paul name. But that has not diminished its appeal to players and collectors.

The Les Paul was not intended to be a “family,” but the success of the goldtop Les Paul Model introduced in 1952 inspired the development of both a fancier model and a less-fancy one, which were in the prototype stage by the end of ’53. Introduced in mid ’54, the fancier Custom had the carved top of the original, while the plainer version, the Junior, was stripped not only of its ornamentation but the carved maple top cap, as well. It had a “slab” mahogany body, unbound fingerboard, dot inlays, and a decal peghead logo. To make it even more affordable, it had only a single dog-eared P-90 pickup rather than the two soapbar-covered single-coils of the original and the Custom.

The Les Paul Junior caught on, as expected, because it was less than half the price of the goldtop. But it also had an unexpected appeal to players for reasons of playability. As it turned out, not everyone liked the curvature of the top on the goldtop and the Custom (Les Paul himself was among those players who preferred a flat top), not to mention the extra weight that the maple top cap added to the goldtop and Custom. The only disadvantage to the Junior was its lack of versatility as a result of having only a single pickup.

In 1955, Gibson filled in what was becoming a gaping niche between the Junior and the goldtop with the Les Paul Special. A bound fingerboard and pearl logo placed the Special above the budget level of the Junior, although it still had dot inlays. The Special’s two pickups made it the electronic equal of the goldtop and of the Custom (although the Custom’s neck pickup was equipped with Alnico V magnets rather than the Alnico IIs of the standard P-90). The covers on the Special were soapbar-style like the higher models, rather than the dog-eared style of the Junior. Tonally, the differences between the Special, goldtop, and Custom were subtle if not imperceptible. The carved tops of the goldtop and Custom were of maple and mahogany, respectively, and they provided slightly more mass, which could have a minute effect on sustain. The Custom’s ebony fingerboard also made for a stiffer neck (with increased sustain) than rosewood-fingerboard necks of the Special and goldtop. The Custom’s Tune-O-Matic bridge offset those sustain-enhancing features by allowing the strings to move more across the saddles than the “wraparound” stud-mounted bridge-tailpiece of the goldtop and Special.

Like the higher models in the Les Paul line, the Special had its own special finish… almost. It actually shared a finish with the Les Paul TV model that had been introduced at the end of ’54. Gibson called it “limed mahogany” (or occasionally “natural” or “limed oak”) and it varied through the years, ranging from a whitewashed look to an almost opaque yellow finish. The “TV model” was so-named presumably because it matched the popular finishes on TV cabinets and furniture of the day, or else because it would stand out when seen on black-and-white TV telecasts, and the “TV” designation became so closely associated with the finish that it became commonly known as TV Yellow.

The Special occupied the same place in sales as it did in the model line – between the Junior and goldtop. In 1956, the Special’s first full year of production, Gibson shipped 3,129 Juniors, 1,452 Specials and 598 goldtops. Sales of Specials actually increased in 1957, although the other models had started to slip, and the Special would soon follow.

While the original Special was worthy of being grouped with the upper models, changes in 1955 and ’57 drew a clear line of delineation straight down the middle of the Les Paul family, with the goldtop and Custom on one side and the Special and Junior on the other. The first of those changes was the Tune-O-Matic bridge. The Custom had it from its introduction, the goldtop got it in late ’55, but the Special never did. Still, the pickups kept the Special in the same league with the higher models – until ’57. The double-coil humbucking pickup, invented and patented by Gibson engineer Seth Lover, represented the first major improvement in pickup design since Ro-Pat-In (soon to be known as Rickenbacker) introduced the modern magnetic pickup in 1932. In ’57, Gibson began putting humbuckers on all of its high-end electrics, such as the Super 400CES, the L-5CES, the Byrdland, the ES-5, and even the midline ES-175. The Les Paul Model got humbuckers, and the Les Paul Custom got three of them, but the Les Paul Special was left behind with its P-90s.

Despite the upgrade to humbuckers on higher-priced Les Pauls, sales for all four models were dropping steadily. In mid 1958, the Junior got a makeover with a double-cutaway body, along with an optional Cherry Red stain finish that resulted in almost double the sales figures. In ’59, the Special got the same treatment with the same results; shipments jumped from 958 in ’58 to 1,821 in ’59. Then, in late ’59, for no apparent reason, the Les Paul Special became the SG Special. For all practical purposes it was the same guitar, with the same double-cutaway body and the same features except for the lack of the “Les Paul” silkscreen on the peghead and a slightly different pickguard.

The Special designation lived on, of course, through the change to the SG body shape in early 1961, and continued to hold the same place in the SG family as it had in the Les Paul family. (The concept of a four-member model family carried over to the Firebirds of 1963, where the Firebird III was the equivalent of the Special.) The Special’s two P-90 pickups offered an alternative to humbuckers that was preferred by such influential guitarists as Carlos Santana (who played an SG Special as well as a Les Paul Special) and Pete Townshend (who played an SG Special before switching to Les Paul Deluxes).

When the Les Pauls came back in the 1970s, the Special proved more popular than the Junior. In fact, the Junior was nowhere to be seen until 1987, while the Special reappeared as early as 1972 in a single-cutaway version, one of which became the main axe of reggae legend Bob Marley. The double-cutaway version became a separate model when it was reintroduced in ’76 as the Les Paul Special Double Cutaway. In the last two decades, due in part to the presence of humbuckers on some models, the Special has dominated the Junior. (Don’t be confused by such names as Junior II or Junior Special, which were derived from the fact that Gibson’s model coding system treats the Special as a two-pickup Junior.) Proof of the Les Paul Special’s continuing appeal lies in today’s Custom Shop line, where Special reissues are offered in single-cut and double-cut versions.

This article originally appeared in VG‘s June 2007 issue. All copyrights are by the author and Vintage Guitar magazine. Unauthorized replication or use is strictly prohibited.