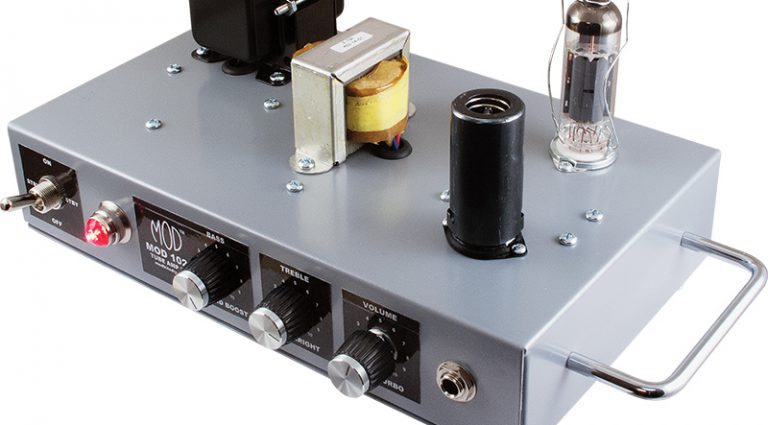 A good friend jokingly remarked that building tube amps is the legal equivalent of taking opiates – instantly gratifying yet highly addicting. If so, then MOD Kits’ 102+ just might be the “gateway” amp build.

This 8-watt, vacuum-tube practice amp is beautifully laid out in its simplicity and the step-by-step assembly instructions are both thorough and encouraging. Unlike many amp “kits” (which are little more than a box of components, a layout, and a legal warning not to electrocute yourself), MOD Kits does not assume that you have a degree in electrical engineering. Nothing is taken for granted, right down to instructions on how to file off the chassis paint around screw holes (to ensure grounding) and tips on how to best position the nuts for easier attachment of tube sockets. There’s even a nice chart identifying the various resistors by their color banding.

The MOD 102+ is based on the Gibson Les Paul GA-5 circuit combined with a British-style Class A output section. A single, cathode-biased EL84 is the power tube, and one ECC803 is the preamp tube; both are mounted on top of the chassis. A high-quality Hammond 269EX power transformer and P-T31 single ended output transformer are supplied. To economize on space, a nifty three-position toggle puts the amp on standby or “on.” Likewise, push/pull potentiometers add functionality to the Bass, Treble, and Volume controls, giving each an added “boost” by switching in capacitors. The filter caps, while not the most expensive available, are more than adequate for this type of amp and are not destined to split apart or short out.

Some skills and equipment are necessary to build this kit. If you’ve never soldered components, a stomp box kit would be a better starter project. But if you have a couple of DIY effects builds under your belt and are looking for a new challenge, the MOD 102+ is a great choice. In addition to a good soldering iron (at least 40 watts, but preferably 60 or 80 watts), you’ll need a multimeter to test connectivity and resistance – preferably one with alligator clips (if you don’t know what a multimeter is, reconsider going any further). Wire strippers, nippers, various pliers, and screwdrivers are assumed. It’s also worth having a solder sucker on hand for those inevitable “Oh, darn” moments.

The MOD 102+ employs screw-on terminal mounts for point-to-point solder connections. Each terminal nub has two holes for soldering wires and components, which is very handy when three or more connections are required (anyone who has soldered components onto eyelet boards knows what I mean). The instructions are laid out in a logical manner that facilitates the easiest access to the terminals. The instructions are also very explicit as to when to solder a joint and when to leave a connection unsoldered because a future step will require the addition of another component. Beginning amp builders would be well-advised to carefully follow every step, but more experienced hands will likely make greater use of one of several very nicely drawn schematics.

You can expect the build to take between four and six hours to complete (a nice Saturday afternoon). The instructions admonish the builder to “Only work on the amp when you are wide awake and sober.” That’s great advice for any DIY project, but when working on tube amps it’s especially important because the DC voltage that even a small amp like the MOD 102+ generates can kill you. The instructions do a nice job of explaining how to be safe when working on the amp, including how to bleed energized filter caps and how to observe the “one hand rule” when working on a potentially energized amp to prevent current pathways to ground that also include your heart.

The MOD 102+ does not come with a speaker – you’ll have to provide your own 8-ohm configuration. After double- and triple-checking layout and continuity, we plugged the finished amp into a 12″ Weber AlNiCo and fired it up. This is the moment when one of three things will happen: 1) the joyous sound of a happy amplifier, 2) no sound, or 3) smoke rising from the chassis. Thankfully, we got the happy sound – a nice, chimey tone that crunches easily when dialed up at respectful bedroom volumes.

The MOD 102+ not only makes for a great practice amp, it’s also great entrée into the world of amp building.