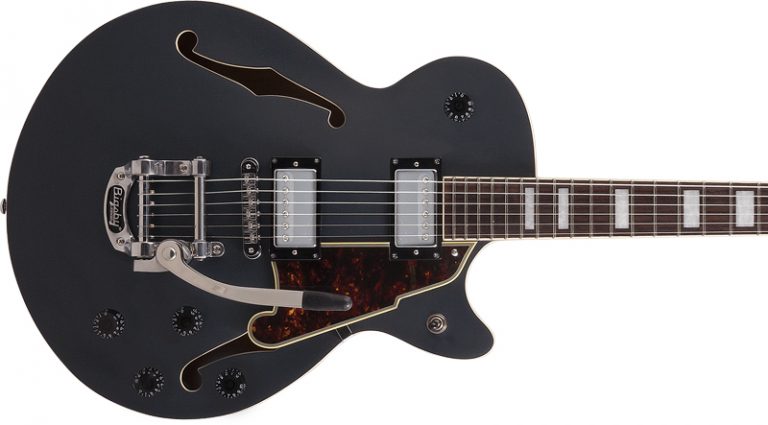 When Bob Weir introduced his D’Angelico Premier SS at NAMM last January, he performed a set of Grateful Dead and solo tunes for a select audience with backing from an all-star band including Steely Dan/Doobie Brothers guitarist Jeff “Skunk” Baxter, former Guns N’ Roses drummer Matt Sorum, steel guitarist Robert Randolph, and others. Weir was all over that guitar, playing songs that ranged from “Dark Star” to “Touch Of Grey” – proof of the sonic capabilities of his latest signature model.

Weir of course was one of the founding members of the Dead, and the musical (and otherwise) adventures of the band need not be mentioned. Weir’s also widely regarded as one of the most inventive rhythm guitarists ever.

Everything comes together in this guitar. You can trust the reborn D’Angelico to make a rock-solid instrument; it’s Weir’s touches that add further magic.

The signature model is based on the Premier SS – a single-cut, thin-bodied, semi-hollow instrument with a center block for added sustain and resonance. The body is 1.75″ deep and 15″ at its widest, with top, back, and sides of laminated maple. The body color is a matte stone finish, a rich grey-black that Weir describes as somewhere between “smoke and a rain cloud.”

The maple neck is sublime – a silky C-shape with 22 medium jumbo frets and a 25″ scale and 111/16″ nut topping the rosewood fretboard.

Crowning it all is that headstock. Modeled after John D’Angelico’s original, it’s like a New York City skyline with mother-of-pearl art deco flash against an ebony-veneer backdrop. Add to that effortless Grover Rotomatic Stairstep tuners and Weir’s name on the truss-rod cover, and there may not be a more stylish – or larger – headstock in all guitardom.

The bridge is a chrome roller Tune-O-Matic backed by a dual-action Bigsby B-50 tremelo tailpiece. All ideal for playability.

It’s in the pickup arrangement, though, that Weir worked his wizardry. The guitar features two D’Angelico dual-coil humbuckers controlled by a three-way toggle selector switch, twin Volume and Tone knobs, plus a single Master Volume knob on the top bout.

Those Tone controls are push/pulls that allow you to select between humbucker and single-coil sounds, which this is a where the sonic adventure begins.

Plugged into a reissue Supro amp, like Weir and band used for the NAMM show, and switched to the native dual-coil humbucker setup, the Premier Bob Weir SS had a vibrant, lush tone. It doesn’t growl like a ’58 PAF, but it’s full and lush, capable of jazzy warm sounds or deep-throated, hard-rocking power chords.

Adjusting to single-coils, you get an instant primal rock and roll slap to the sound that’s urgent and demands to be heard.

The best is yet to come, though. Mix one pickup set on humbucker with the other on single-coil – front or back, it doesn’t matter – and the tone is drop-dead stunning, both rich and resonant with a lethal sting to its tail.

The Master Volume provides immediate control over the guitar. Plus, the knob makes volume swells simple.

With the pickup setup and control arrangement, the versatility and options are phenomenal. In fact, it’s tough to think of another guitar with such sonic flexibility – and easy playability to boot.

If you’re a confirmed Deadhead and the Premier Bob Weir SS is too staid for you, D’Angelico also offers its new Premier Grateful Dead DC, a thin-bodied double-cut featuring the steal-your-face red, white, and blue lightning-bolt motif.