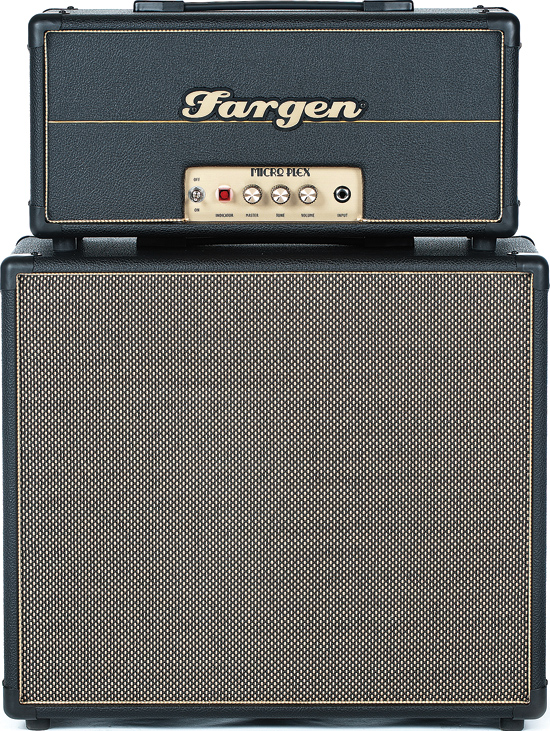 From 50-watt monsters to 5-watt heads, Fargen Amplification is known for building amplifiers intended for working players. Two of Fargen’s more recent releases – the John Lennon Signature JL-15 combo and the Micro Plex head – may seem miles apart in concept and application, but as it turns out, both uphold their maker’s reputation for quality, functionality, and innovation.

The John Lennon JL-15 is a combo powered by two EL84s and featuring an 8-ohm 12″ Fargen-designed ceramic speaker. The amp’s immediate visual calling card, of course, is its grille cloth featuring a large print of Lennon’s iconic self-portrait. Top-mounted Tone, Volume, and Master Volume knobs are on a plate featuring Lennon’s signature and, most notably, Fargen’s two-way Liverpool/Plastic Ono “Decade” control. The amp is made in the United States and is constructed using a tag board with vintage carbon-comp resistors and ’60s-style mustard tone caps. It also features a proprietary bracket to isolate and reduce tube rattle. The cabinet is made from Baltic birch and is covered in black tolex with decorative white piping. The JL-15’s 15-watt output is channeled through either an 8- or 16-ohm speaker output on the underside of the chassis.

The Micro Plex is a 5-watt Class A single-ended design utilizing a lone 6L6 for power, along with a 12AX7 to cover the preamp duties. For those who like to tinker, the amp can utilize any octal power tube, from the demure 6V6 to the mighty 6550. The head-only amplifier has Volume, Tone, and Master controls, along with push/pull controls for Gain Boost, and Tone Shift. The single speaker out can handle from 4 to 8 ohms. The Micro Plex features construction similar to the JL, also utilizing carbon comp resistors and SoZo mustard caps, along with a U.S.-built transformer.

Both Fargen amps were tested with a ’67 Telecaster and a Gibson Les Paul ’59 reissue. The J-15 delivered instant gratification. For those who are understandably skeptical of a Lennon amp, wondering if it might be standing on name recognition alone rather than its own merits, rest assured that this is not the case with the JL-15. The two-position Decade switch truly gives the amp a twin personality. In Liverpool mode, the amp is firmly planted in AC15 territory – plenty of chime and grind depending on knob positioning and the guitar used. In Plastic Ono mode, it shifts deftly into blackface Fender territory – more lows, a bit more headroom, and smoother highs. The tonal variation provided by the Decade switch is a knockout. Additionally, the Volume, Master, and single Tone knobs offered smooth tapers and plenty of tonal variation to complement both the Tele and the Paul. Volume-wise, the JL-15 is certainly club-friendly but humble, nonetheless. Its toneful 15 watts might require reinforcement when playing with a higher-decibel group. 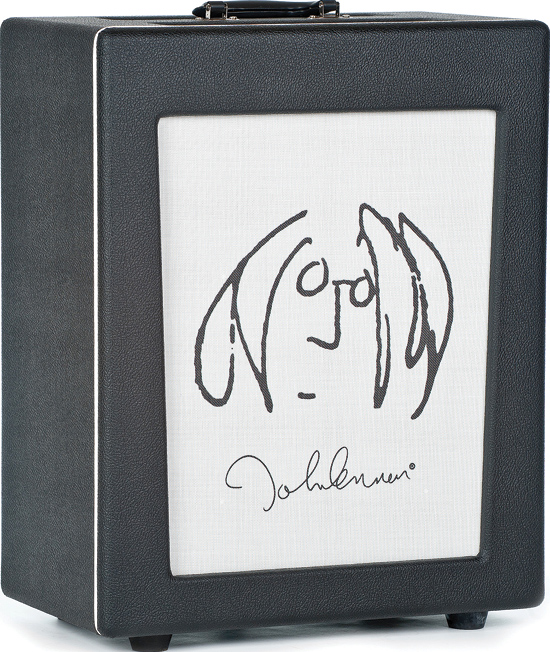 Plugging into the Micro Plex, the Tele was switched to the neck pickup position to test the clean headroom. With Volume halfway up, Master on full, and Tone at 9 o’clock, a nice semi-clean platform was achieved that could be dirtied up simply by digging in a bit more with the pick. The Tone had to be kept on the low side with the Tele or it could quite easily get into Bakersfield-treble territory. Playing the Gibson, the clean headroom quickly dissipated, but it was replaced by a fat, grinding tone. Turning up the Gain produced even more smooth distortion that never got even a hint ratty, even with the pull Gain or with the Tone turned up. With the Les Paul on the neck pickup, the volume on full, gain boost on, and the master pegged, the amp produced the long sustain and singing tone that one usually only finds over a 100 dB.

In the JL-15 and the Micro Plex, Fargen offers two incredible player-friendly amplifiers. The Lennon has an eye-catching look and versatile tone that make it much more than a tribute amp. Its AC15-to-blackface quick-change makes it the perfect amp for the many who swear by these tones. The Micro Plex has the tweed-Champ-meets-plexi tone that will crunch hard at bedroom levels and sing when paired with a humbucker-equipped guitar.