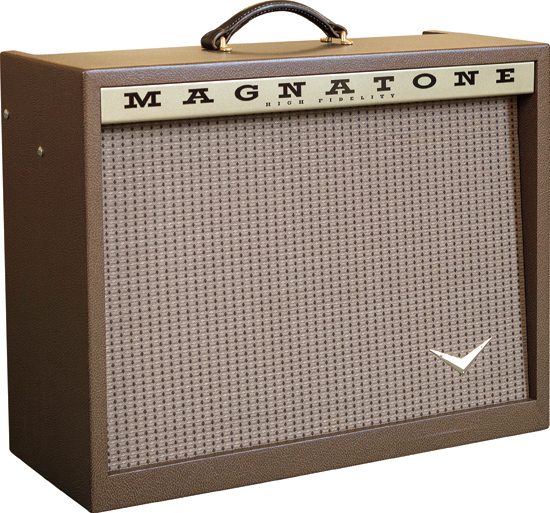 Magnatone is dead, long live Magnatone! The original Magnatone amp company died in 1969 after several decades of making storied “Golden Voice” amps noted for their “real” vibrato effect. Buddy Holly played his Strat through one, Scotty Moore swore by his, and Neil Young remains a believer.

Now, Magnatone is back, and that vibrato sounds sweeter than ever.

We can thank Ted Kornblum for the revival. His family founded St. Louis Music, creators of Crate amps and Alvarez guitars and long-time owners of Ampeg. Launched at January’s NAMM show, the new Magnatone line is American-built, tube-powered boutique amps.

The Magnatone Twilighter will be familiar to vintage fans, resurrecting the look of the original company’s Custom 200 Series of 1957 to 1961, which introduced the vibrato effect. The Twilighter is powered by a GZ34 and a pair of 6V6s for 22 watts in a Class AB design. The test model had a single 12-inch Eminence Governor speaker, but production units will switch to a proprietary speaker made by WGS (a Celestion Blue Alnico upgrade is available).

In honor of Buddy and his beloved Magnatone 280, The Twilighter was tested with a ’56 Stratocaster and proved itself a time machine back to a classic rock and roll sound. This is not a bluesman’s amp: the sound doesn’t easily break up, but for an amp of this power, that’s what overdrive pedals are for. On the other hand, the Twilighter also doesn’t have a lot of headroom, but you don’t usually get that in a smaller combo. Instead, its creamy tone and clear voice would have earned an approving nod from Buddy.

On the road to resurrecting Magnatone, Kornblum enlisted the aid of several notables to voice and test the amps. Young’s guitar tech Larry Cragg helped voice the Single V model. The Rolling Stones are using the new amps on their 50th anniversary tour and Keith Richards has a 10-watt Lyric model for his dressing-room practice amp.

Billy F Gibbons is recording and touring with a prototype Magnatone Super Fifty-Nine, its 45 watts arriving via a pair of EL34 power tubes with two 12″ speakers. Gibbons explains the allure of Magnatone and its vibrato: “Fender amps used a tremolo that blossomed loud and then retreated. The Magnatone’s vibrato was a completely different animal. It used an oddball device called a varistor, which created all-genuine, real vibrato, changing the note’s pitch.”

Magnatone’s “Golden Voice” frequency-modulating vibrato came thanks to engineer Donald L. Bonham, who filed for a patent on his invention in 1954. While Fender and others boasted of having “vibrato” in their amps, the effects were actually just tremolos. Now, Kornblum’s new amps use the same vibrato with silicone-carbide varistors as the originals.

Dial in the Twilighter’s vibrato, and the real fun begins. Strum shimmering chords, hit warbling, watery single notes, or, at an extreme, create Theremin-like wails. The effect is so cool, so far out, that you can’t get enough.

Controls allow the player to adjust vibrato speed and intensity and shift between vibrato and conventional tremolo. The solidly built foot pedal alters the speed of the vibrato or lets you “wah” it between fast and slow to articulate the voice.

The Twilighter also includes reverb with a tube-driven, four-counter-wound-spring long pan. It’s a nice reverb sound, but the unit only has one control, dialing in the amount of reverb but not allowing dwell adjustment. Thus, for all practical purposes, the reverb is really either on or off. More control would be welcome. 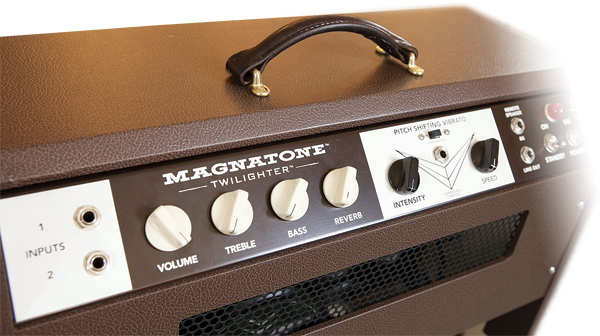 The Twilighter’s look is a stylish facelift of the original Custom 200 Series and leaves nothing to be desired. The solid cabinet is constructed of plywood and well finished in vintage brown leatherette. A strong, high-quality leather handle lifts the unit, which is not light: the combo weighs about 55 pounds.

The Twilighter is available in several forms: the combo as tested or with the upgrade Celestion; a head unit with either a 1×12 or 2×10 extension cab, the later fitted with Jensen P10Rs; or as a stereo combo with four 6V6s, 22 watts per channel, and twin 12s.

This is not a reissue. Rather, it’s a modern take on a classic, with upgrades and refinements that would make it a great gigging amp boasting a tone that oozes a glorious vintage vibe.