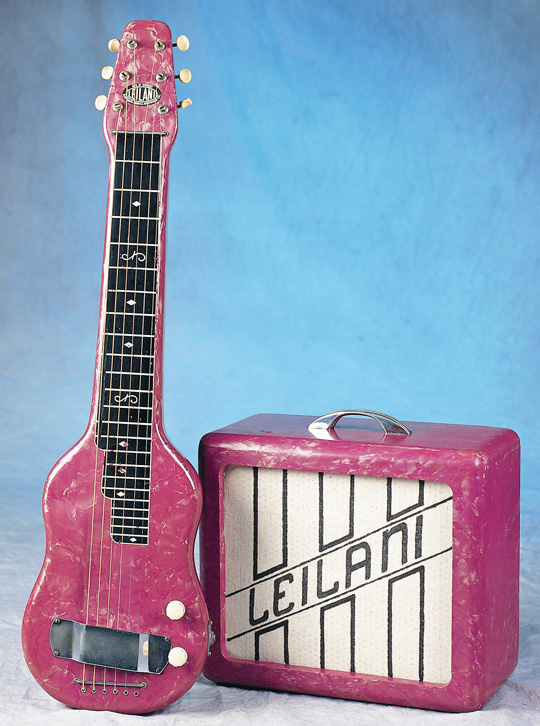 As Hawaiian music gained popularity in the 1920s and ’30s, performers turned from guitars made of wood to metal-resonator instruments produced by the National Stringed Instrument Company. By the mid ’30s, many began to play electrically amplified instruments because they were louder and sweeter-sounding than even the resonators – and more practical when performing before large crowds. Students of the guitar often learned the Hawaiian style first, with the guitar flat on the lap and the strings tuned to an open chord, played by moving a metal bar up and down the strings to produce the flowing, melodic sound associated with luaus, palm trees, leis, and pineapples. This was an easy way to start playing, and today these early student instruments often bear fretboard markings from 1 to 12, either as factory originals or thoughtfully inked into place by a helpful teacher to assist in navigating the strings.

These early lap-steel instruments were often made from plain planks of wood, though Rickenbacker offered both Bakelite and metal guitars for professional use, while National/Dobro used solid metal. Gibson and many other manufacturers stuck with wood for their lap steels, and many were constructed like smaller guitars, with standard headstocks and tuning machines, bound bodies, flame maple, and (sometimes) round necks. For the student market, feedback from merchants indicated something more was needed to dress up the lower-line guitar. They tried simply painting the wood, adding a companion amplifier, and using a celluloid material resembling a pearl to dress up their exteriors. 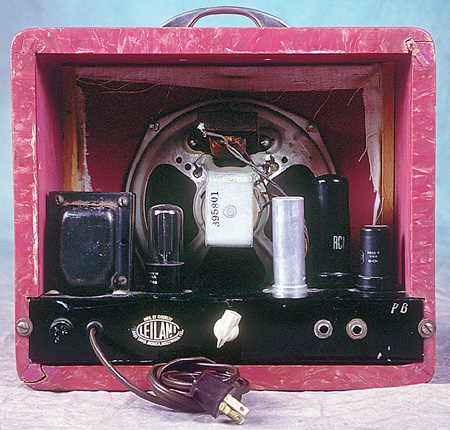 In the ’20s, simulated pearl was used on the necks of banjos, a few guitar headstocks and fingerboards, and it became a popular covering on accordions. The material seemed the perfect covering for popular student lap steels, since it was moldable, stain-resistant, was made in a wide variety of colors, and could also be used to cover amplifiers to create a matching set. By the late ’30s, lap steels were available in this covering. Advertising from the period described it as “non-cracking mottled plastic,” “pearl effect celluloid,” and “rich pearlescent covering.” The covering came to be called “pearloid” (or more affectionately, “mother of toilet seat”) and became standard for student and amateur-grade instruments in the late ’40s. Several larger manufacturers produced pearloid lap-steel guitars under a variety of brands, one being the Valco Manufacturing conglomerate, which sold instruments under the Supro, National, Airline, Bronson, Kay, Silvertone, Lomey, Tonemaster, and Oahu, among others. Nearly all manufacturers were active in the lap-steel market because of its size, and Gibson, Regal, Epiphone, Rickenbacker, Fender, Magnatone, Harmony, Carvin, Vega, and even the Japanese manufacturers of Teisco and Yamaha instruments took part. As the popularity of Hawaiian music began to fade, students were often ushered into the guitar-playing fraternity via the lap steel, which had now found a new home in country-and-western music, albeit in a more-complex instrument that could change the pitch of strings via levers and pedals, and which often sported multiple necks. In the ’50s, thousands of lap-steel guitars were sold, and demand stayed strong until the Beatles invasion. By ’65, the giant Sears & Roebuck catalog no longer listed lap-steel guitars, and other manufacturers cut back offerings. Only Rickenbacker and Fender still offered a lap steel (without legs) as late as 1975.

The importance of the lap steel cannot be understated. Some of the earliest electrically amplified guitars were lap steels. The first appearance of the famous Gibson “Charlie Christian” pickup was on a lap steel. Leo Fender actually got his start building lap steels. For thousands of youngsters, it was their first exposure to the joys of making music, being simpler to play than a regular guitar. Guitar manufacturers were able to profit from the sale of thousands of lap steel guitars and combo outfits, money that could be invested for development of new guitar designs. It can be argued that without the success of the amplified lap steel, the solidbody Spanish guitar might have come much later. 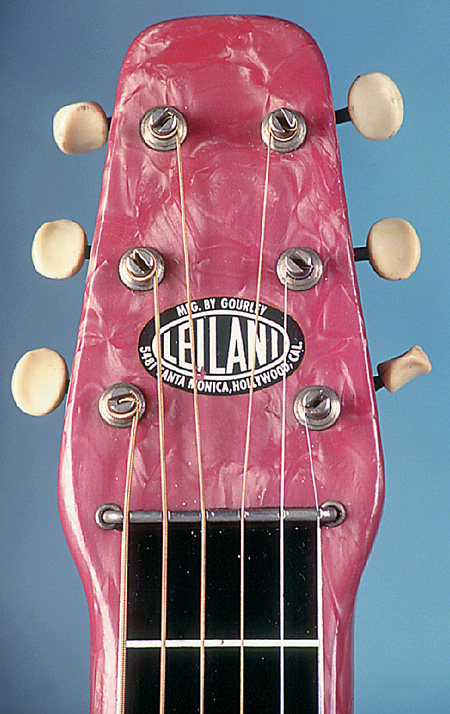 The Leilani lap steel and amplifier combo typifies all that is wonderful about these instruments. The pearloid finish covers both guitar and amplifier cabinet, the guitar has a symmetrical “guitar-shaped” body with upper and lower bouts, and there’s an Art Deco efficiency to their styling. The amp has a sort of “refrigerator” carrying handle, and is just the right size with its 6″ speaker, two inputs (in case a friend wanted to join in!), and single Volume control for its four watts of power. The grillecloth announces the name boldly, and while the headstock reads “Leilani, Mfg. by Gourley,” Hollywood CA,” it has all the identifying marks of a Magnatone product of the mid ’50s, particularly the location of the pickup, concealed underneath the pearloid. The fretboard’s  diamonds and stylized “f” markings are exactly like those on other Magnatone products of the period.

The most interesting thing about this  combo, however, is its purple-ish pearloid. Some colors were much more common than others – white, brown, different shades of blue and gray, yellow, and cream are seen often. Green or red is not so common, and  purple is unusual, indeed – and makes this shiny little set both desirable and perfect for playing Santo and Johnny’s 1959 hit, “Sleepwalk,” the only single played on a lap steel guitar ever to hit #1.

Lap steels are popular among collectors today chiefly because of the “cool” factor associated with any period artifacts. Laps from the ’30s are historically interesting because they were some of the first electronically amplified instruments. Many of the post-war years have a compelling Deco styling. While many lap steels, particularly early Bakelite Rickenbackers and some later Valcos, are sought-after, lap-style playing is fairly uncommon these days, and most lap steels are sought more as works of art or interesting objects to hung on a wall. The variety of pearloid coverings, body shapes, and specialized appointments such as fancy bindings, sparkly tuner buttons and knobs, or contrasting paint schemes, make these irresistible collectors’ pieces.

This article originally appeared in Vintage Guitar Classics #04. All copyrights are by the author and Vintage Guitar magazine. Unauthorized replication or use is strictly prohibited.