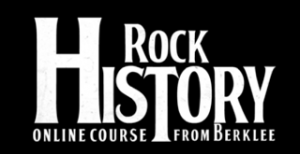 Berkleemusic.com, the online school of Boston’s renowned Berklee College of Music, is launching Rock History, an online course that chronicles the evolution of one of the greatest periods of music. Rock History takes an in-depth look at the highs and lows of rock over the past 60 years; the key heroes and villains, the movers and shakers from the studio and the concert stage, and a behind-the-scenes look at the managers, industry executives, promoters, and cultural trends that shaped it.  Steve Morse will author and teach Rock History. Morse was the senior rock writer at the Boston Globe for over three decades and has contributed to other top-tier press outlets such as Billboard and Rolling Stone.

Throughout the course, students will view exclusive, never before seen Berkleemusic video interviews with rock luminaries including: Joe Perry of Aerosmith; Bob Weir of the Grateful Dead; Mike Mills of R.E.M.; Ernie Isley of the Isley Brothers; George Clinton of P-Funk; producer Jack Douglas (who has worked with Aerosmith, Patti Smith, and John Lennon); promoter Don Law; Amanda Palmer; Hugo Burnham of Gang of Four; Duke Levine (who has played with the J. Geils Band and Aimee Mann); and English super-session drummer Dave Mattacks. Berkleemusic has also partnered with Wolfgang’s Vault to provide additional rare audio, video, and other forms of historical rock media presented in an educational context for the very first time