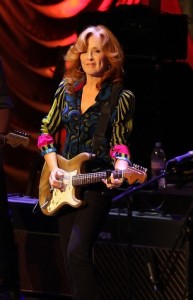 After the April 10 release of Slipstream, her first studio album in seven years, Bonnie Raitt will embark May 1 on the first leg of her 70-date tour. The first single from the album is a cover of the Gerry Rafferty hit “Right Down the Line,” from 1978. The album is otherwise highlighted by Raitt’s trademark slide-guitar playing. On tour, she will be backed by James “Hutch” Hutchinson (bass), Ricky Fataar (drums), and George Marinelli (guitar), and Mike Finnigan (keyboards). Opening acts will include Marc Cohn and Mavis Staples.

On February 12, Raitt will perform with Alicia Keys in remembrance of Etta James at the 54th Annual Grammy Awards. For more, go to bonnieraitt.com.