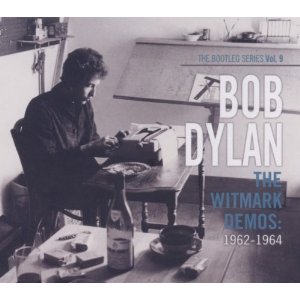 Bob Dylan’s stylistic periods are not firmly defined; folk-singer Dylan (who never really went away) blended into rock and roll Dylan as Another Side Of Bob Dylan led to Bringing It All Back Home as his folk-singer side came forward again with John Wesley Harding, which introduced a developing “born-again Bob.”

Despite dozens of albums released and pathways trod, for many, there just can’t be too much Dylan. The Bootleg series has been a boon to those hungry for more or who missed a half-decade or two of his work. Volume 9, The Witmark Demos, has two discs recorded early in his career, accompanied only by his own guitar, harmonica, and some piano. Though some of his finest early material (“Mr. Tambourine Man,” “Girl From The North Country,” “Boots Of Spanish Leather”) is included, Witmark shows how and why he captivated such an enthusiastic following before his songwriting became hailed by some as his primary – and wrongly, to others, as his only – accomplishment. Dylan himself has said he is no Caruso, but he has always been a great entertainer who communicates vocally with moving effectiveness as when he goes straight to the heart and soul on the nostalgic “Bob Dylan’s Dream” and the anti-war “Ballad Of Hollis Brown.”

As a guitarist, he’s not Segovia smooth, but like a folk-music cross between B.B. King and Keith Richards, he plays the right thing at the right time using the guitar to extend the expression of his lyrics. It took some people years to get what producer John Hammond saw almost 50 years ago. Some still don’t, or don’t want to. But The Witmark Demos will open up more than a few eyes, ears, and minds.