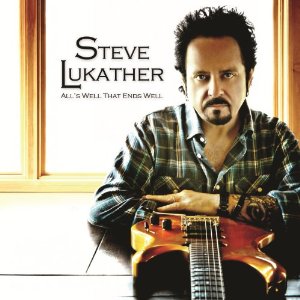 If you’re waiting for a full-blown Steve Lukather guitar album, this isn’t it (actually, it was 1982’s Baked Potato Super Live, but that’s another story). Instead, this record is very much in the Toto vein, combining rock, pop, funk, fusion, and blues vocal tunes into a tidy package.

Fortunately, most every tune sports one of those killer Luke solos. “Darkness in My World” is the opener and it’s a classic Toto-style tune, mixing styles freely, but allowing room for Lukather to spin his six-string magic. And though a rather dated style of pop, “On My Way Home” sounds very much like something you’d hear from Steely Dan (one of Luke’s favorite bands). And the ballad “Don’t Say It’s Over” lets the guitarist show off his famous “heavy melody” side, where his lead goes from soft and introspective to face-melting in just a few seconds.

All’s Well That Ends Well is a polished, commercial-rock affair, geared for Toto’s enormous fan base in Europe and abroad. Fortunately, it also has a ton of good guitar work and mega-fat tones. If you have a yearning for big ’80s-rock sounds and lead work from one of rock’s best soloists, you won’t go wrong here.

Various Artists – A Twist of Marley