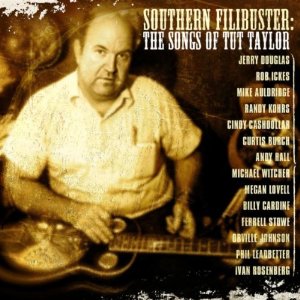 Tut Taylor is a self-taught virtuoso who plays his Model 27 square-neck Dobro with a flat pick. He first caught the public’s ear while playing with Vassar Clemens in the Dixie Gentleman, and the two later joined Norman Blake and Randy Scruggs to work with the late John Hartford.

At 86, Taylor no longer performs or records very often, so 14 of the best resophonic players who ever picked up a slide appear on this tribute made up primarily of songs from his 1972 Friar Tut album. The players are a mix of veterans like Cindy Cashdollar (“Little Green Pill”), Mike Auldridge (“This Ain’t Grass”), Curtis Burch (“Black Ridge Ramble”), and producer Jerry Douglas (“Southern Filibuster”) to rising stars Rob Ickes (“Oasis”), the Infamous Stringdusters’ Andy Hall (“Resophonic Guitar”), and 20-yearold newcomer Megan Lovell (“Reso Fandango”). Sure, this is a treat for lovers of resophonic guitar in all its variations. But this is the cream of the crop of resophonic players (all worth a further listen) represented in one volume; anyone with a functioning pair of ears should dig this.

Donovan – Try For The Sun: The Journey Of Donovan