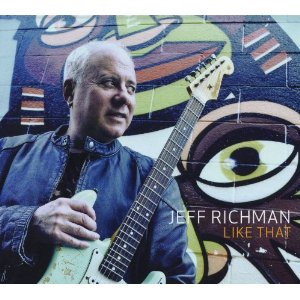 The title cut is a laid-back funk with chord changes that call to mind Steely Dan at its jazziest; Richman effortlessly navigates the changes and gets a little nasty as the solo wraps. Colaiuta adds syncopated genius to “In Spirited” and “Awful Pretty,” the latter a ’70s-style fusion piece that sounds fresh, with Richman contributing a surprising solo. The former adds a bit of rock to the proceedings.

The sound of “In Flux” matches its title, starting as a swinger with Richman rippin’ before it morphs into a funky march, then back to swinging jazz dominated by a head-spinning solo. “Touch and Go” has a bluesy rock feel and a solo with pinched notes, soaring/gliding runs, and a middleeastern feel. And the ballad “The Endless In Between” lets him show off a soulful, melodic side while Deron  Johnson serves up a lovely solo on the Fender Rhodes.