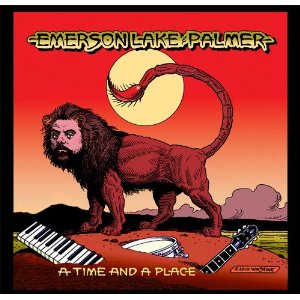 The anthology is nicely arranged and annotated with one distinct era per disc – early-’70s, late-’70s, the ’90s, and a CD devoted to bootleg recordings. Disc one opens with the band’s debut gig at the Isle of Wight on August 29, 1970 – in a heartbeat, hundreds of thousands of English rock fans got their minds rearranged by Greg Lake’s simply thunderous fuzz bass in “The Barbarian.” Lake was equally well-regarded

as an acoustic balladeer, his talents displayed here on “Ballad of Blue” and, from ’74, the classic “Still… You Turn Me On.” One treat is a complete version of the fabled “Karn Evil 9” laced with Lake’s melodic electric work. Disc two is the weakest of the set, covering ELP’s woefully inconsistent “comeback” later in the decade. One highlight is the epic track “Pirates,” arguably the band’s best piece from this era, and a full reading of 17-minute “Tarkus,” but much of the rest is forgettable.

Things rebound on disc three, documenting the band’s excellent ’90s reunion with everything from the anthemic “Touch and Go” to Lake’s deft acoustic on “From the Beginning,” originally from 1972’s Trilogy album. The final disc is a treasure trove of fan bootlegs, including a rare recording of one of their best songs, “The Endless Enigma,” as well as more of Lake’s gentle balladeering on “C’est La Vie” and “Closer to Believing.” While ELP lost a great deal of credibility in the late ’70s and then missed the ’80s gold rush enjoyed by fellow Brit-bands like Genesis, Yes, and Pink Floyd, their cumulative work brims with spectacular moments.

Whether you liked the trio for their songs and virtuoso musicianship – or found their music pompous and overblown – no one can deny ELP was an arena-rock powerhouse in its day. And this excellent box set proves that mightily.

The Elvin Bishop Group – Party Till The Cows Come Home