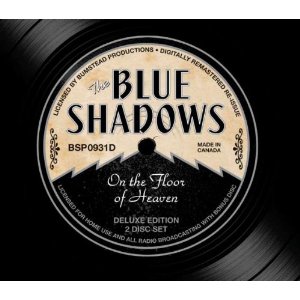 Led by Bill Cowsill and Canadian guitarist Jeffrey Hatcher, the guitar-strong rockabilly-oriented Blue Shadows made two fine albums in the ’90s, but neither was released in the U.S. and they weren’t able to capitalize on the raves they won on the alt-country circuit. Hatcher quit performing, but is still recording, while Cowsill worked with various bands in Canada before he passed away in 2006.

This two-disc collection represents the band’s compact but worthy legacy. Disc one, the band’s first album, is all original, and disc two collects bits and pieces from its short history. Both feature the tuneful vocal harmonies and tightly orchestrated interplay between Hatcher’s sparkling electric leads and Cowsill’s acoustic rhythm that characterized the Blue Shadows’ sound. Disc one has a slight edge simply because of the smoother flow that comes from it being a fully realized album. But disc two is no throwaway. On both, Hatcher’s playing is as good as anything you hear from kindred contemporaries like the Jayhawks.

Thanks in large part to Cowsill’s disciplined pop sensibilities, both include original material with memorable, appealing hooks and melodies (“If I Were You,” “Deliver Me”) and whatever indefinable quality that makes some songs such a joy to hear coming out of a car radio. Disc two mixes well-chosen covers including Merle Haggard’s “If We Make It Through December” and a bang-up reworking of Arthur Alexander’s “Soldier Of Love” with delightfully catchy Hatcher/Cowsill originals. Among those, the upbeat “A Paper ’N A Promise” and the Everly-Brothersstyle ballad “Learn To Forget” standout among a collection that is pretty strong to begin with.

John Gorka – The Company You Keep