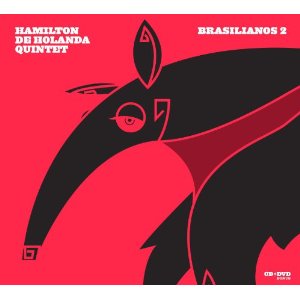 Brazilian jazz, when played by a native group such as Hamilton De Holanda’s quintet, is far more interesting than what usually passes for Brazilian jazz. Holanda combines his native Choro music with foreign styles such as Bossa Nova and fusion without losing its essential Brazilian nature.

Holanda’s quintet has an unusual assemblage of instruments; 10-string

mandolin, guitar, harmonica, bass and drums. But they deliver as rich and full a set of musical parts as any horn band. Holanda wrote all the music on Brasilianos. And while the styles and time signatures vary, each composition has powerful rhythmic underpinnings mated with a contrapuntal melody line using layered harmonies. It forms some of the most cohesive and textured music you’ll hear.

The sound quality on this album is top-notch. A less-than-pristine recording could easily have obscured the subtle interplay between the harmonica and the mandolin. But recording engineer Daniel Musy and mastering engineer Marcos Saboia captured every nuance of Holanda’s quintet’s playing.