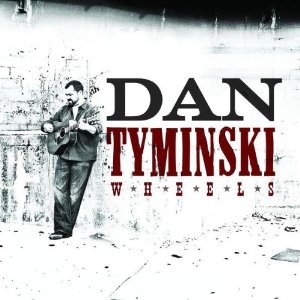 Even if you haven’t heard of Dan Tyminski, you’ve likely heard his music. His Grammy-winning version of “I Am A Man of Constant Sorrow” from the soundtrack O Brother Where Art Thou? garnered a ton of radio airplay. Few musicians can count on a lifetime gig, but Tyminski’s “day job” in Alison Krause’s Union Station band is at least as secure as any tenured college professor. But he still pursues solo projects, and Wheels is an excellent course in what makes him tick, musically.

Tyminski delights in adding extra bluesy down-home funk to country and bluegrass tunes. The added grit may be a reaction to what he plays in Union Station, where arrangements lean to clean and slick. Tyminski and his band turn every cut into an instant bluegrass classic; Union Station bandmate Ron Block’s “The One You Lean On” is a good example of how Tyminski can emphasize a song’s core. The instrumental solos are all solid, but subservient to the tune’s emotional impact. On mandolinist Adam Steffy’s instrumental, “Knock, Knock,” Tyminski demonstrates his formidable rhythm-guitar chops. Keeping up with Steffy’s mandolin, Ron Stewart’s banjo, and Justin Moses fiddle isn’t for the faint-hearted. And despite the superb picking, the real star is Tyminski’s voice. Even cameos by Vince Gill and Sharon White can’t upstage his powerful lead vocals.

Though it has taken eight years for Tyminski to record this second solo album, the gap wasn’t due to a lack of direction. Wheels occupies a precise space in bluegrass between old-time and modern. His neotraditional approach will appeal to anyone whose tastes lean toward traditional acoustic Americana.

This article originally appeared in VG’s Sept. ’08 issue.  All copyrights are by the author and Vintage Guitar magazine.  Unauthorized replication or use is strictly prohibited.
The Guide