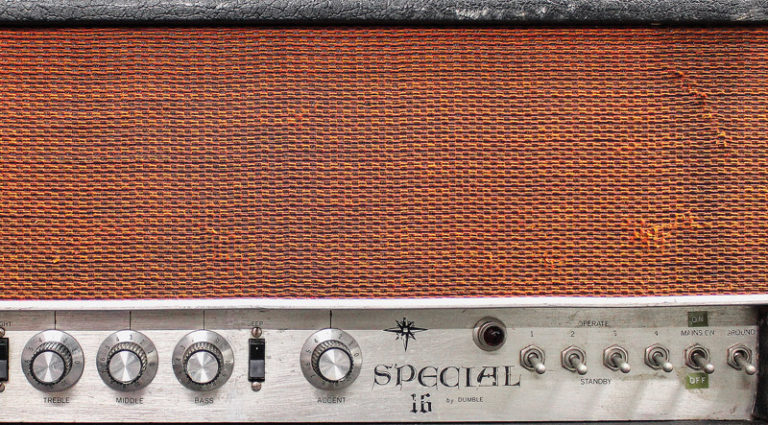 For all the vintage guitar amplifiers that have attained top-level collectibility – the ’50s tweed Fenders, copper-panel Vox combos, and early Marshall JTM45 and “plexi” heads – nothing has equaled the creations of Howard Alexander Dumble.

The amps designed and made by Dumble (see our memorial in this issue) were elaborately crafted one-offs, and a veritable case study in supply-and-demand on the used market. But they’ve attained five- and even six-figure prices because they sound uncommonly wonderful. As artists like Robben Ford, Kenny Wayne Shepherd, Larry Carlton, Carlos Santana and others attest, Dumbles don’t just make you sound good, they inspire you to be a better player. And while his Overdrive Special and a few other notable models have drawn all the attention over the years, earlier, more-obscure creations like our featured amp this month are a timely reminder of the occasional diversions along his path to greatness.

This unusual monster, a Special 16 built in 1971, was birthed after Dumble accumulated several years of experience at the solder gun, but before his flagship design began to make him the go-to tone guru. And “unusual” is an understatement; the simplest answer to the question “What the hell is it?” is, well, it’s four 50-watt Fender output stages cobbled into one massive 200-watt head, joined by a preamp section with classic roots but rendered in the inimitable Dumble style. Beyond that, it’s Special 16 number 0001 – the first ever made – and for all we know, the only one. For the second big question – “Where the hell did it come from?” – well, we have some of its history.

“In the mid ’80s, I was in bands and jammed with a lot of local musicians from Gilroy, Morgan Hill, Hollister, Salinas, Monterey and San Jose,” said the amp’s current owner, California native Michael “Miko” Malinao. “I bought the amp as-is from a local musician for $100 or $150. I can’t remember his name, but the power tubes were missing and something had shorted-out, as there is a cluster of burnt wires coming from the transformers. Being an 80-pound beast, I figured it must have some wicked power.”

Malinao was born in Gilroy and lived there until 2019, when he moved to Oregon. Until then, he’d been a fixture on the regional music scene; he formed the band Mild Storm in the ’80s and enjoyed a 21-year run with the popular local outfit.

“When I bought the amp, I had no idea who Howard Alexander Dumble was, or that he had a shop in Santa Cruz,” Malinao tells us. “I did know who Randall Smith was, thanks to Carlos Santana, and I ordered an ’83 Mesa/Boogie Mark IIC combo, which I had upgraded to a C+ by Mike Bendinelli. I’d planned to have the Dumble refurbished, but life happened; I got married, had three kids and a full-time job, plus I was gigging every week. So, it went into my garage and hasn’t been fired up since.”

Though plenty of stars were knocking on his door, by the early ’80s, anything out of Dumble’s ODS spectrum was, to some extent, just another custom order built to a local musician’s requirements. Given its quadruple-Fender-like appearance, massive wattage, and general austerity, we might deduce this one was built as a bass amp. But, mega-watt guitar amps were also all the rage in the early ’70s, and appeared the natural way forward for many players; in ’83, studio/touring guitarist/solo artist Todd Sharp, now a respected amp maker in his own right, commissioned two 150-watt custom OD models and used them on the road with Rod Stewart and others. Also, Robben Ford has said Dumble personally told him the original ODS was inspired by hearing Ford play through a cranked blackface Bassman head and cab in the late ’60s. Put the pieces together and this amp makes sense as a Dumble “prequel.”

Rather than a four-stage bass amp, a closer look reveals the Special 16 employs certain components specific to Fender’s Super Reverb of the day, with four power and output stages loaded into one massive chassis, and a shared preamp in front of them. We have no way of knowing why Dumble named it Special 16, but if that’s some kind of sum of the equation 4×4, it makes sense – even more so if you consider attaching four 4×10″ cabs to it. The output transformers are all stamped with matching codes; 606004 tells us they were made by Schumacher in the fourth week of 1970, while 022855 tells us each was a 2-ohm OT intended for a Fender Super Reverb. In addition, each is stamped “Fender,” not surprising considering Dumble often used certain off-the-shelf Fender parts.

So, does that mean we’ve got a Super Reverb preamp minus reverb and tremolo in front of this crazy output stage? One might guess so, but a little more digging reveals that’s not the case. Yes, the Super Reverb had two independent channels with Treble, Middle, and Bass controls on its second channel, but this is a two-channel amp with shared three-knob tone stack, and a look at the circuit reveals it appears to be driven by a cathode-follower stage – as used in the tweed Bassman of 1957-’60, which also had Treble, Bass, and Middle controls. Prior to the EQ, each of two Volume controls taps its own triode gain stage in the shared first preamp tube, as did Fender’s tweed amps.

All of this forces us to look at that quad of Super Reverb OTs from a new perspective. Schumacher took over supplying transformers to Fender around 1960, with gradual introduction of new parts happening as existing supplies were used up. The OT that evolved into the 022855 would, in late 1963/early ’64, become standard equipment in the Super Reverb (stamped with a different code in the pre-CBS years) and was used on the 4×10″ Concert before that. Prior to that, though, it was also used on some of the last tweed Bassman combos ever made, into mid 1960.

Ta-da! The Super 16 is a quadruple tweed 5F6A Bassman – made by Alexander Dumble. Which is to say, a heavily modified tweed Bassman circuit with a lot of originality, to the extent we can barely call it that. It’s something to consider regardless; perhaps the seminal guitar amp of all time, rendered anew by the most revered amp maker in history. Modifications the tweed Bassman never had are found in the Bright and Deep switches, though the former merely lifts the bright cap positioned on the 5F6A’s potentiometer (and makes it bypassable), while the latter offers a selection between two capacitors that voice the Bass control. The Accent control is Dumble’s renaming of the traditional Presence, and rectification is solid-state rather than tube.

Built to be very stage-able in regard to function and power, this elaborate monster has four independent Standby switches to engage each of the output segments, and each of the OTs is connected to a dedicated speaker-out. Which is to say, the amp was never intended to pump 200 watts into one or two extension cabs, but 50 watts each into four individual cabs, or perhaps the user’s own reduction in 50-watt increments.

Anyone familiar with the insides of a Dumble will recognize the black epoxy goop he used in later years to mask circuits from would-be cloners. Here, though, said goop is used simply to hold wires in place, and doesn’t cover anything – making this a rare example of a Dumble circuit left fully on display.

In addition to frying something in one of the power transformers, the heat generated from these four hulking units mounted side by side (with no help from the eight 6L6s arrayed at the back edge of the chassis) appears to have played havoc with their condition. The rust and tarnish on the bell covers indicates their enamel finish had overheated and deteriorated, and we’d bet that caused even more damage to other functional components.

Any contemporary amp tech will tell you the entire thing is kind of… insane. Especially coming from the hand of the most revered guitar-amp maker of all time. It’s all cleverly put together, but when you consider other ways the end result might have been achieved – fewer transformers, fewer tubes, less heat, less weight, and far fewer wires – it almost forces you to conclude that someone just wanted it this way: “Alexander, build me four Bassmans in one!” Regardless, Dumble was never one to take the easy road with a circuit, and the beast likely sounded phenomenal. We can speculate, but unless someone with knowledge comes forward, we’ll never know how and why it came to be. We’d hoped to get word to Alexander Dumble himself to see if he had any recollection of what inspired this amp and for whom it was made, but his passing the very week this article was being written robbed us of that opportunity. If any reader familiar with the mid-coast California music scene of the early ’70s knows something, please get in touch and we’ll put a satisfying cap on one of Dumble’s most enigmatic creations.

As for Malinao’s plans for the amp, much depends on the world’s reaction to his find.
“It was only when my friend, John Eblen, mentioned that his friend, Steve Zakel, was having his Bassman featured in Vintage Guitar (March ’22), that I remembered this amp. I started researching and realized it was a slice of Dumble history, and that someone might provide more information.”

The History of Hamer, Part One