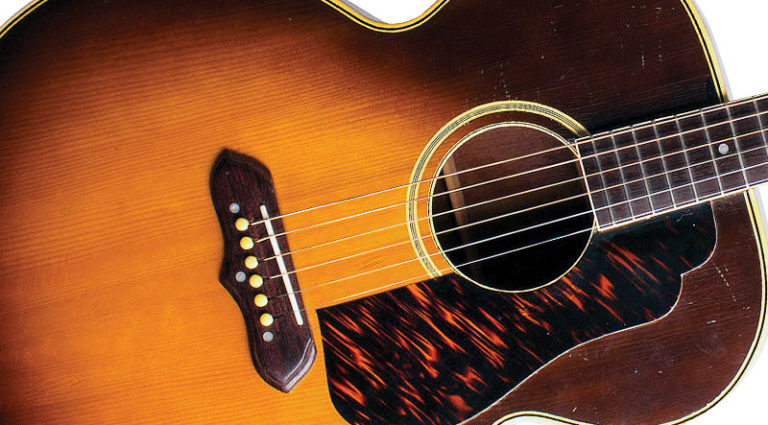 Through the 1910s and early ’20s, Gibson catalogs denigrated flat-top guitars as inferior, unworthy of the company name. But that tune changed in 1926, when it introduced the L-1 and L-0 alongside its unique archtops.

Perched at the bottom of the line, one feature set them apart from traditional flat-tops – a narrow waist and more-rounded lower bout. This became a Gibson trait that found its way onto some of the most-celebrated guitars. Standing as the prime example is the J-200.

When introduced in 1937, Gibson’s fancy “King of the Flat-Tops” was called the SJ-200 Super Jumbo. Originating from guitars custom-made for singing-cowboy stars, notably Ray Whitley, that narrow-waisted body set it apart from its main competitor, Martin’s dreadnought. Like the ’20s L-1, the SJ-200 was built with archtop body lines, in this case similar to the “advanced” L-5.

At a whopping $200, the 17″ rosewood-bodied SJ-200 was aimed at Western-style entertainers and, in the Depression, affordable only to highly paid pros. Production was limited and Gibson logically concluded a cheaper version might appeal to less-well-heeled cowboy players.

The result was the Super Jumbo 100, which first appeared in Gibson’s 1939 AA catalog, with the blurb, “In creating this fine flat-top… not a single Gibson innovation for tone projection has been slighted in any way. It is an instrument that never fails to bring forth superlative praise from those desiring a deep, brilliant toned guitar at a price considerably below the top.”

For once, Gibson didn’t over-sell, as the SJ-100 really is a superb design, sharing the 200’s narrow-waisted 17″ jumbo body and long scale, but with restrained cosmetics and one major material difference – the back and sides were mahogany instead of rosewood. In common with the 200, the top is spruce and the neck is laminated two-piece figured maple. The trim was plainer all around with a triple-bound top, single-bound back and fretboard, unbound headstock, and plain pickguard.

The original list price was $100, which, in Gibson fashion, gave the guitar its name. It was raised almost immediately to $110 on the October ’39 price list and crept up to $131.25 by late ’41, as the run-up to World War II sparked rapid increases. It could be paired with a silk-lined Faultless Case #600 SP in lacquered tweed with red and black stripes that added $32.50 to the cost – almost enough to buy an L-00! A flannel-lined version was $24.50.

The initial SJ-100 included several unusual features, most novel being a peghead with stair-stepped sides, shared with two other mid-line models introduced in ’39 – the 16″ round-shouldered J-55 and the ES-250 electric archtop. This design no doubt proved awkward to produce and was quickly supplanted on all three with a standard Gibson head.

The first SJ-100s also had a simplified version of the “moustache” bridge used on the 200. This was still an elaborately carved affair using adjustable bearings under each string in place of a conventional saddle. This was also short-lived and soon gave way to a smaller, simpler two-tiered rosewood piece. This distinctive (if whimsical) bridge was also shared with the J-55 and a pair of budget 16″ Jumbos built under the Recording King brand for Montgomery Ward. Inlaid pearl dots discreetly covered three bolts used to secure it to the top.

A feature common to all SJ-100’s is thick triple binding around the top edge. The extended stepped-edge pickguard on the treble side of the top was another new element, again shared with the J-55. Made of the flashy “firestripe” celluloid seen only on pre-war Gibsons, the oversize guard is unusual in how it completely covers the soundhole rings. This was not an accident; Gibson applied it to guitars aimed at hard-strumming cowboy players who quickly wore away finish in that area.

The ’41, SJ-100 shown here has its curly maple neck topped with a bound Brazilian-rosewood fretboard. Ebony was specified in the catalogs, but deviations like this are common. The headstock is ornamented only with a thick pearl script Gibson logo and fitted with early open-back metal-button Kluson tuners. The first SJ-100’s used more-expensive cast Kluson Sealfast machines with fluted-metal buttons, but those were discontinued with the original headstock.

The SJ-100 was not designed for the fancy flatpicking many players today associate with pre-war flat-tops, but as a strummed rhythm tool to accompany crooning cowboys. The sound is big, rich and powerful, ringing with volume and enough punch to drive a band along, if required. The combination of mahogany back and sides with the jumbo shape was a seldom-used recipe, as standard J-200s were rosewood before World War II, maple afterward. That mahogany results in a tone that’s less-boomy than rosewood and with more air than maple. It’s an interesting formula, ripe for reinvention. 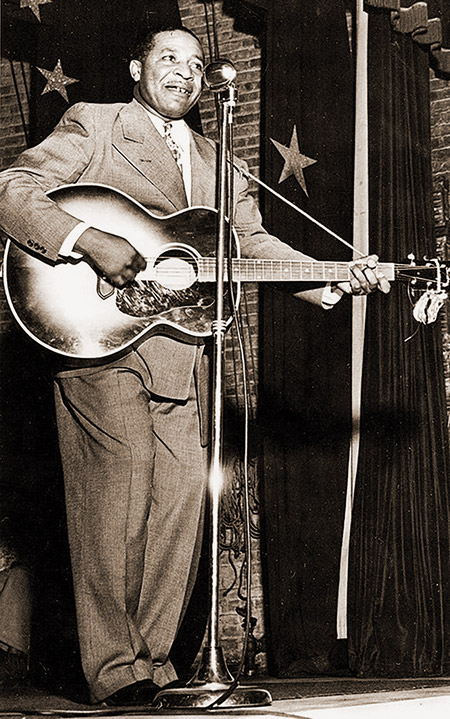 With its short, limited production history, the SJ-100 is a rare guitar in any form – 59 were shipped in 1941 and the total is well under 200; just 138 are accounted for in extant shipping records.

Though forgotten except by hardcore Gibson flat-top enthusiasts, the SJ-100 did garner prominent users, starting just as it was discontinued. The most influential was blues master Lonnie Johnson, whose work with Louis Armstrong, Duke Ellington, Eddie Lang, and many more from the ’20s through the ’60s blurred the boundaries of blues and jazz. He was featured on hundreds of vocal and instrumental blues records, under his own name and as a side man. If that weren’t enough, in the ’20s, Johnson was the first to record single-string guitar solos with a pick, influencing everyone who has played non-classical guitar since. Next time you’re bending strings in the pentatonic box, give a nod to Lonnie.

Johnson used many guitars throughout his career, including an unusual early jumbo 12-string, various Martin flat-tops, and, near the end, a cheap Kay electric. From the ’40s into the early ’50s, he favored an SJ-100 identical to our featured guitar, acoustically at first, then later fitted with a DeArmond RHC-B soundhole pickup. This is likely the instrument heard on many of his Victor recordings from that period, cut with pianist Blind John Davis among others.

An earlier SJ-100 was the longtime companion of WWII-era yodeling Western star Elton Britt, whose name might not mean much to modern country fans, but was a crossover success in the ’40s. His signature song, “There’s a Star Spangled Banner Waving Somewhere” may seem maudlin today, but the patriotic anthem was a huge hit in the war-time U.S., selling over a million copies in an era when that was a rare accomplishment. He enjoyed lesser country hits into the early ’50s; his novelty recording “Uranium Fever” has been making the rounds of internet popularity. Britt’s SJ-100 was a 1939-pattern version with stair-stepped peghead and adjustable mustache bridge. It had an unusual block-inlaid fretboard that appears factory, though it’s impossible to know for sure. Britt played his SJ-100 for years, posing with it in publicity photos well into the ’50s.

Working in a similar vein was Yodeling Slim Clark, who was friendly with Britt and eventually joined him in the Yodeler’s Hall Of Fame. Slim proudly displays his ’41-style SJ-100 in numerous publicity pictures with the then-standard tassel strap. The name “Slim” was added to the guitar’s top in small letters under the pickguard.

Slim and Britt represent the audience Gibson intended for its Jumbo flat-tops, as singing/yodeling Western performers were all the rage in the ’30s and ’40s, so there was enough work for them to fund a fairly expensive guitar. In the early ’50s, even more long-lived Nashville star Little Jimmy Dickens was often seen with a first-gen SJ-100. A real fireball onstage, Dickens was one of the era’s most-colorful country performers even though he stood all of 4′ 11″. Credited with introducing rhinestone-studded Nudie outfits to the Opry stage, he loved to hang flashy, oversized guitars on his diminutive frame.

Dickens also led one of the hottest bands in Nashville, The Country Boys, with world-class pickers including Grady Martin and Thumbs Carllile, and steel-guitar legend Buddy Emmons passing through the ranks. Some Dickens records include sophisticated twin-guitar harmony picking from Martin and Jabo Arrington (VG, January ’22), succeeded by Spider Wilson and Howard Rhoton. And he was the first Opry performer to have his bassist, Joel Price, appear with the newfangled Fender Precision.

Dickens’ hot band suited his sometimes-raucous persona, and in the mid ’50s he cut a few sides verging on rockabilly. Still, his most-remembered song is the left-field 1965 novelty hit “May The Bird Of Paradise Fly Up Your Nose.”

Dickens was not a technical player, but hammered out solid rhythms on his SJ-100. The guitar was gradually modified through the ’50s, going back to Gibson for a J-200 bridge early in the decade, then later for a larger pickguard that covered the upper side emblazoned with the artist’s name. It looks like Paul Bigsby’s work, though may have been done by his rejected apprentice, Semie Moseley. In ’57, Dickens got a new J-200 and apparently retired his 100 from live work. It was still part of his collection when the guitars were listed for sale in 2015, by which time it had been refinished and heavily modified with a new bridge, pickguard, and Super 400 headstock.

Gibson stopped making the SJ-100 in 1942, as most instrument production was put aside for war work. The J-200 returned to the catalog in ’48, but the 100 was not revived after the war. In the ’50s, Gibson tried a junior version with the J-185 – a 16″ maple guitar with mahogany neck – another superlative instrument that essentially failed, sales-wise, but has since become highly desired. Over the ensuing decades, the J-200 maintained its status as Gibson’s “King of the Flat-Tops,” while various princes have come and gone. The J-100 name was revived in the ’70s, but the instrument was hardly comparable.

The pre-war SJ-100 holds a place in Gibson history as one of their best obscure ideas, suited to its market and a victim of war-time circumstance rather than any inherent flaws.

Special thanks to Rich Kienzle.