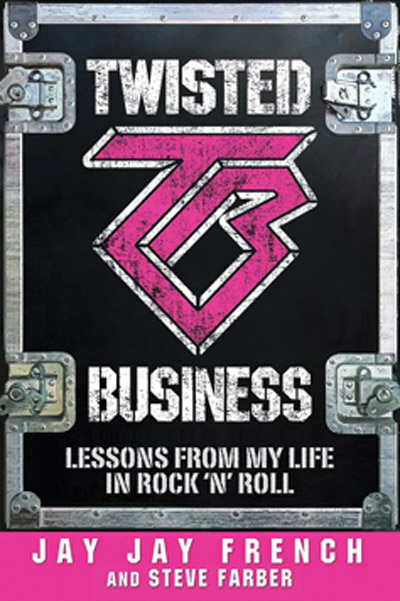 Twisted Sister co-guitarist Jay Jay French is a resilient man; the see-saw of personal and professional triumphs along with troubles he has endured would’ve destroyed most people. His new autobiography is also a business-advice guide incorporating what he has learned in a (nearly) 50-year career.

French, who auditioned for Kiss precursor Wicked Lester, was a drug dealer/user as a teen, and relives several misadventures wrought by that reckless lifestyle. Realizing it was hindering his rock-star dream, he gave it up; later, Twisted Sister became staunchly anti-drugs/drinking. Still, it took a decade of dogged hard work to ink a record deal.

As a successful businessman, French managed Twisted Sister and Sevendust, and he oversees licensing deals including use of their megahit “We’re Not Gonna Take It.”

Many guitar-related stories are included, like how his cash offer of $135 to buy a Telecaster priced at $147.50 at the renowned Manny’s in NYC was rudely rejected, but accepted at another store. These days, French rarely plays, but he still tends to a world-class collection of vintage guitars. A fascinating and blunt memoir.

Chet Atkins and Mel Cochran – Chet Atkins: Me and My...