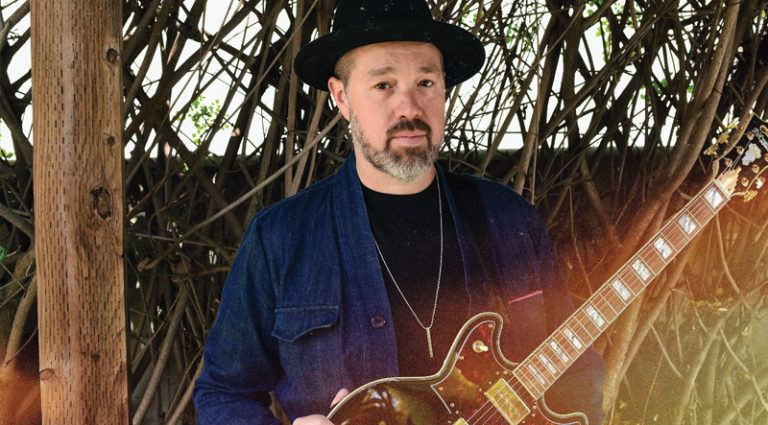 Groovemeister Eric Krasno continues to push his funky, soul-jazz narrative with guitar front and center. His new record, Always, features his vocals embedded within cutting-edge technology and contemporary-retro beats. The founder of Soulive and Lettuce, he has also amassed a slew of producer credits, but Always stands as a milestone for documenting a highly successful music career and a new family.

A theme in your music is blaxploitation film soundtracks of the ’70s.

It’s hard not to. I love Curtis Mayfield and all the stuff from that era, but I think he did it the best. There’s so much soul and groove in that music. My favorite stuff is when you can combine that groove and that feeling and tell a story at the same time. That’s the ultimate music for me.

Your new band is called Eric Krasno & The Assembly, but you and co-producer Otis McDonald recorded Always without the band.

Yeah, it’s all me and Otis. I’m doing guitars and bass, both of us play keys, and he plays, bass, too. On “Silence,” I tracked the harmony solo with myself; I got into that because I was a big Allman Brothers fan and was playing with Derek Trucks a lot. I also played with Oteil Burbridge on his side project and with the Allman Brothers. That song made me compose solos in a simpler way. I’d think ahead and try to play something that was easier to harmonize. That’s one of the themes on the record – a lot of the solos have harmony parts.

I met Otis when he did production on a cover of “The Man In Me,” by Bob Dylan, that I was working on. It was so good that we did the whole record remotely, sending tracks back and forth. We never met until the end, when we got together on the mixes because things opened up. I never thought it would sound so live. It’s a very analog-sounding album, but couldn’t be more digital. We’re both influenced by artists like Funkadelic and even D’Angelo, and “Good Thing” has a lot of Herbie Hancock elements. That’s me playing the Fender Rhodes – a keyboard solo for the first time on record.

How did you make that chilly tremolo sound on “So Cold?”
I used an old Boss TR-2, but it was all about the fuzz, which I put before the tremolo, and put some nice reverb in the output. I used the MXR Super Badass Variac Fuzz, which is great; I have a lot of fuzz pedals, but keep that on my board because I can get a lot of tones out of it. Also, you can make it sound like it’s using less voltage – something I learned from Doyle Bramhall, II. He has a whole rig where he gets all his batteries at half power. I was like, “Wow!” His whole thing is you can’t plug in at a full nine volts. I don’t go quite that deep, but the Super Badass mimics that sound.

What inspired the envelope filter solo on “Lost Myself?”
I’m on Provogue Records, and they signed Maceo Parker, who I’ve worked with. I was going to have Maceo play the solo on “Lost Myself” because it had all these horns. But I played the solo as a joke – I was faking it, trying to be Maceo on guitar (laughs). I sent it to Otis, and he was like, “Naw, man. You gotta keep that.” So, we kept my solo. The envelope filter is the closest thing to getting that Maceo sound.

Was there a go-to guitar for this record?
For most of it, I was using the PRS Silver Sky that John Mayer gave me. I got into a Strat vibe, and the Silver Sky nails it; I got addicted to that guitar. Toward the end, I used a D’Angelico a bit, and for acoustic stuff I used a Rockbridge. That’s my signature Ibanez on “Hold Tight.”

What’s coming up?
The Assembly is on the road next year, hitting it hard, playing festivals. I’m also the music director for a few events where I’ll be working with Chaka Khan, Trombone Shorty, Jackie Greene, and Marcus King. Soulive is getting back together for two short runs. So it’s going to be very busy, and between all of it, I have a one-year-old son.