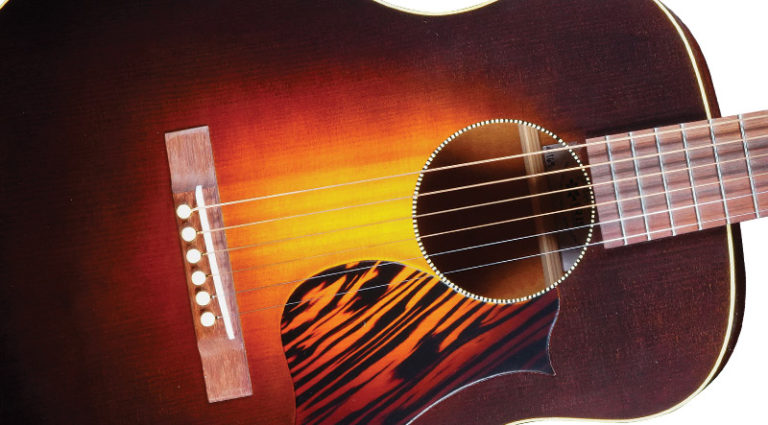 Among the famous names in American guitar lore is Dan Erlewine – guitarist, builder, VG columnist and editorial consultant, and of course, world-class repair expert who literally wrote the book on the craft. Now he has partnered with Iris Guitar to bring to life a reimagined version of his personal favorite guitar – a 1937 Kalamazoo KG-11.

The Dan Erlewine DE-11 is right out of the pages of a pre-war catalog. Aesthetically, it’s a dead ringer for the guitar that inspired it, with an Adirondack spruce top that sports a lovely sunburst under a satin finish, tiger-stripe pickguard, straight bridge, and ladder bracing. The mahogany back and sides also sport a light satin finish and give the guitar a worn vibe. The mahogany neck is 1.75″ at the nut, with a 25″-scale and a huge V shape – a bold feature that, while not for everyone, drives home the point that this is from another era.

The DE-11 becomes Erlewine’s own at the headstock. Elongated between the nut and the start of the peghead, it actually starts more than 2″ behind the nut – a feature designed to give hands better access to chords near the nut; to some, it’ll at first feel even more foreign than it looks. The tuners also draw attention. Erlewine insisted on rear-mounted banjo tuners by Rickard Cyclone. Smooth and precise, they’re a nice touch. What’s more, the first seven positions have built-in brass capo threadings, allowing a player to screw-in included capos from the top of the neck. This feature offers two advantages – no capo on the back of the neck, and precise control of tension on the strings.

This guitar sounds even better than it looks. Warm, punchy, and just a little woody, its satin finish stays out of the way so the guitar can project nicely – belying its concert-ish size. The V neck may impose a learning curve for some, but those experienced with the shape will find it to be a riot – this is no soft V. And while the capo system isn’t a quick-change operation, the afforded tension control keeps the guitar in tune incredibly well when adding and removing capos.

A decidedly modern take on a decidedly vintage guitar, with the DE-11, Iris and Erlewine have found a sweet spot between then and now.