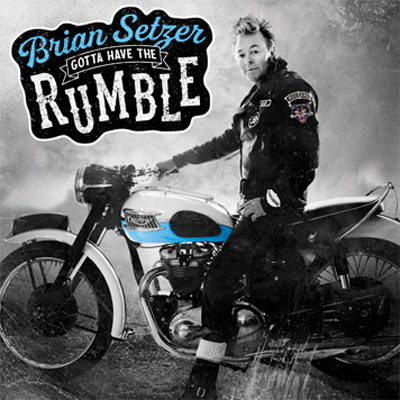 Setzer’s first solo album in seven years straddles the line between what you want and what you expect. You get both Stray-Cats-flavored rockabilly ravers and the big-band beats of the Brian Setzer Orchestra, but more of the former. The title refers to the physical feel Brian gets playing hollowbody boxes – particularly his Gretsches – with a big amp. His battle with tinnitus is also a factor, along with his love of motorcycles and hot rods.

The cocky swagger of “Checkered Flag” (co-penned with Stray Cats drummer Slim Jim Phantom) sports Setzer’s amp-tremolo twang, along with clever lyrics and a catchy vocal hook. “Smash Up on Highway One” evokes Dick-Dale-esque Middle Eastern and surf tones. As expected, a heavy ’50s vibe is present throughout, especially on the Elvis-channeling “Stack My Money” and laid-back “Drip Drop.”

“The Cat with 9 Wives” is a loose rocker with an uncharacteristically long guitar solo; the song combines the best of the Stray Cats’ rockabilly bluster and mischievous lyrics with the BSO’s energetic swing. As advertised, the boisterous “Rockabilly Banjo” crackles with Setzer’s jumpin’ banjo chops.

Gotta Have the Rumble doesn’t break new ground, but it’s a revved-up listen for hepcats, hotrodders, and twangers alike.